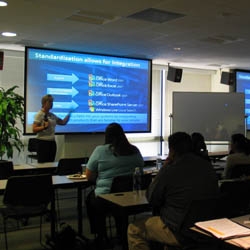 The user group was hosted by Dynamics West “the Dynamics NAV experts”. Having been involved in the NAV/Navision community since the very beginning of Navision in the US (1997) many of the staff were excited to be the ones to host this watershed event for the Los Angeles Dynamics NAV community.

The user group started with personal introductions then got down to business with an hour and a half presentation on What’s New in NAV 5.0. From the new Copy to Excel, Copy to Word and Document Link buttons to the user-configurable Analysis Reports for Sales, Purchasing and Inventory to the new Inventory Costing worksheets, the experts at Dynamics West showed feature after feature and answered any and all questions thrown at us. As CEO David Cintron says, “After all, we stand behind our claim that we are the Dynamics NAV experts and we’re not afraid to prove it.”

Following a catered lunch was a guest speaker from Microsoft. Information Worker Specialist Claire Saddington gave a presentation showing how Dynamics works with the Microsoft Office product line, including how Dynamics NAV can interface with not only Excel and Word but also synchronize with Outlook and can e-mail, send and receive hyperlinks and even share data with Microsoft Project.

The highlight of the user group and its true purpose came at the end in the user peer networking session. Many users were fully engaged in discussions with each other in true user group form. The next Los Angeles area Dynamics NAV user group is scheduled for November.