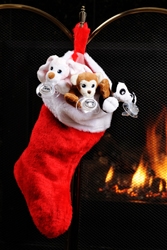 Ideal for infants from two months and up, Paci-Plushies™ are the only detachable pacifier holder of its kind that allows for use with popular brand infant pacifiers such as MAM®, Avent®, Evenflo®, Nuk®, Nuby®, Munchkin®, and Playtex®. Visit the Paci-Plushies™ website for a complete list of over 200 varieties of compatible pacifiers.

The huggable holders ship worldwide and are available in trendy boy, girl and neutral animal themes such as Paisley The Panda, Milo The Monkey, Cuddles The Cat, Koko The Koala and P-Nut The Puppy. They retail for $9.99 at PaciPlushies.com.

Stacy Dallman, president and CEO of New York based Nookums™, and mother of two small children, recognizes the need for frugal holiday shopping this Christmas season. “With so many families feeling a pinch from the current economic situation, I felt it was important to do my part in helping shoppers stretch their dollar,” says Dallman.

Nookums™ designs, manufactures and distributes the innovative line of plush pacifier holders. The Buffalo, New York based company was founded in 2007 when Dallman invented the Paci-Plushies™ as a means of locating her toddler daughter’s pacifier around the house. After successfully testing the juvenile products market at the 2008 ABC Kids Show in Las Vegas, Dallman’s creation was featured in Parenting magazine and became an instant hit for mothers of pacifier using babies.

For additional information about Paci-Plushies™, log onto www.PaciPlushies.com . Email questions, comments or PR requests to CustomerService@PaciPlushies.com or call 1-800-493-0246.