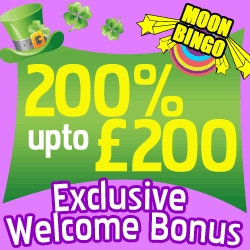 London, United Kingdom, March 11, 2009 --(PR.com)-- Moon Bingo, a 6 year online bingo veteran, has announced its most aggressive promotion to date, Giving Away 200% up to £200 in free cash bonuses for first time depositors.

Moon Bingo also added a 48 hour prize draw - during the 48 hour promotion, Moon Bingo will select five players to win 5 High Definition Camcorders. The winners will receive the Camcorders directly to their homes by March 23rd.

Moon Bingo’s Director, Mr. Adi Frum, had this to say about the St. Patrick’s Weekend promotion:
“With over 25 different games and tens of thousands of active players Moon Bingo is quickly becoming one of the leading bingo rooms online. We are now in the process of building Moon Bingo to attract more online players than ever before.

After surveying hundreds of Moon Bingo players they have realized how important aggressive bonus offerings and free prizes are. The new promotion should deliver what online bingo players have been looking for- a fun and exciting bingo room with exclusive bonuses and prize draws, £1,000,000 bingo jackpots, daily guaranteed jackpots and free registration bonuses.”

As to their new players’ preferences Moon Bingo’s Director had one distinct observation: “We have learned that once players decide to join Moon Bingo, they normally name it as their primary online bingo destination”.

Moon Bingo is licensed and regulated to offer online gaming services under the laws of Gibraltar through Cassava Enterprises. Moon Bingo is powered by software belonging to Brigend Limited. Moon Bingo encourages responsible gambling and supports the activities of GamCare.

After the 48 hour promotion ends, Moon Bingo will keep awarding new players with up to 20 free tickets when they register and up to £100 free bonuses when they make their initial deposit.