Verragio, manufacturer of engagement rings and wedding bands, debuted the new additions to their collections at the JCK and Luxury by JCK show with overwhelming success. The JCK shows provide an audience composed of some of the most high end retail establishments across the globe and have given VERRAGIO the opportunity to establish new relationships with several of these retailers. 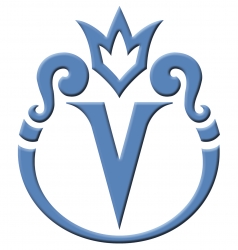 New York, NY, June 19, 2009 --(PR.com)-- Verragio has expanded their collection of engagement rings and wedding bands to include styling that is distinctively Verragio. With a creative influence fueled not only by consumer demand, but also by the Verragio signature logo and exclusive Lumino Setting, the new styles have been phenomenally received by new and existing retailers. With these new additions to the Classico, Insignia and Paradiso Collections, along with the official launch of the new Couture Collection, Verragio has been fortunate to add eight new retail establishments to their growing family from the JCK Shows. “The JCK shows have proved to be a great source of exposure for Verragio over the years,” says Barry Verragio. “We have not only received a positive response to the new engagement ring collections, but we have been able to establish six Verragio retailers as official Verragio Premier Boutiques, the ultimate destinations for the latest in Verragio engagement rings and wedding bands.”

Verragio specializes in engagement rings and wedding bands of the highest quality and beauty. Verragio is the creator of the Lumino Setting, a revolutionary setting technique that reveals all sides of a diamond, opening up every facet to light. Available in platinum, gold and palladium, Verragio offers designer engagement rings, wedding bands, men’s wedding bands and eternity bands that can be seen only in carefully selected, authorized retail establishments. Verragio has been featured in fashion publications such as InStyle, Elle, Marie Claire and W magazine as well as trade publications such as INSTORE, INDESIGN and JQ. 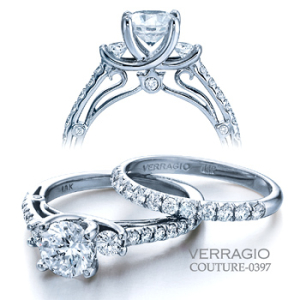 Verragio's Couture Collection is a series of engagement rings and wedding bands featuring Verragio’s signature Lumino Setting along with a crown shaped bezel beneath the center stone. 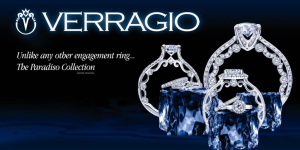 The Paradiso Collection was specifically designed with the wearer’s comfort in mind. Each piece within the collection hugs the contours of your finger to create the perfect fit and prevent the ring from spinning on your finger 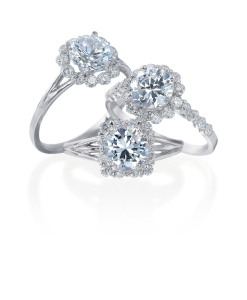 Featuring a simple scrolling design beneath the center stone exclusive to the Insignia Collection, and the prevalence of diamonds over metal, the Insignia pieces are symbolic of a commitment that cannot be matched by any other expression. 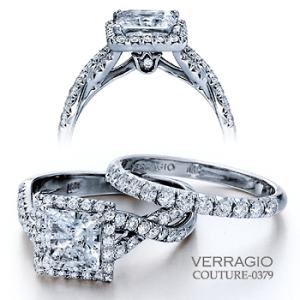 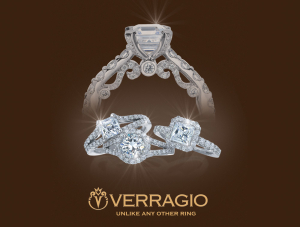