"Kool & The Gang Live at PJ's, Hollywood" was the band's third album and is acknowledged as one of the finest jazz-funk albums of the '70s. 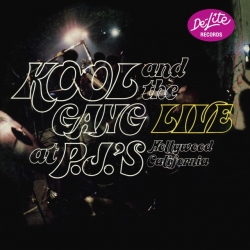 Originally released in 1971, “Live At PJ’s” is classic Kool & The Gang from their early jazz and funk influenced days, long before they became soul crossover sensations of the late ’70’s early ‘80s.

This album has been out of print for some time and has been totally remastered in 24 bit from the original first generation DeLite master tapes.

The 16 page full color booklet includes a major essay from K&TG historian Cleveland Brown, who has worked with the band for over 30 years. There are also rare photos and memorabilia, along with the original liner notes and full session personnel.

Features bonus track “The Penguin” recorded ‘live’ at PJ’s but not included on the original album.