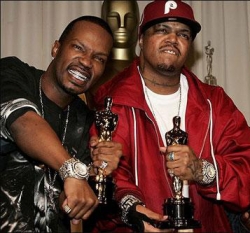 Hollywood, CA, July 15, 2009 --(PR.com)-- Oscar winning hip-hop artists, DJ Paul and Juicy J of Three 6 Mafia, have teamed up with reality showrunner and producer, Adam Briles (Survivor, The Contender, Out of the Wild: The Alaska Experiment), on a new television project titled, “Cookin’ Ain’t Easy!” The project was developed around DJ Paul and Juicy J’s genuine passion for cooking and entertaining. “Basically, the show is about how cooking ain’t easy - and the pressure of our guests turns the heat up,” said Juicy J. “We’re not just cooking soul food like people might expect - we’re cooking Indian food, Italian, Asian, Middle-Eastern food - all different kinds of foods that people wouldn’t think we could cook. It’s a comedy, it’s funny and we love bringing people together for it.”

The multi-platinum selling artists will be hosting a hand picked group of personal friends, fans and celebrity guests in their Hollywood mansion each week. The dinner parties and cooking tutorials that ensue are a raucous comedy of fun, cocktails, gourmet cuisine and brutally honest critiques. “It is a completely fresh approach to a cooking show,” said Briles. “You get much of the same take-away information that viewers expect from the genre, but it is served up in such a unique, relatable and funny way that it is just flat out entertaining.”