New Documentary on Painter John Marin Will Premiere in December

217 Films and independent filmmakers Michael Maglaras and Terri Templeton announce the premiere of their new film about American master John Marin. On Friday, December 11 "John Marin: Let the Paint be Paint!” will make its world premiere at the Portland Museum of Art in Portland, Maine. This film tells the story of one of the most important American artistic figures of the first half of the 20th century. Features works from the private collection of Norma Marin seldom seen anywhere.

On Friday, December 11 at 6:30pm, John Marin: “Let the Paint be Paint!” will make its world premiere at the Portland Museum of Art, Seven Congress Square, in Portland, Maine. There will be an encore screening on Saturday, December 12 at 2:30pm. Tickets are $7 and will go on sale at the Museum beginning at 10:00am the day of the screening.

This documentary highlights Marin’s development as a man and as an artist from his early years as he struggled with his own artistic identity as a young man studying architecture, to his first moments of self-discovery as an etcher and painter, and brings us, finally, at the end of his life and in his 80s, to the painter and man whose unending quest for the new never ceased, and who served as the creative example to painters as diverse as Mark Rothko and Jackson Pollock.

John Marin: “Let the Paint be Paint!” tells the story of one of the most important American artistic figures of the first half of the 20th century, and the undisputed father of American Modernism. Utilizing more than 70 of Marin’s paintings, drawings, and etchings, including those in the private collection of Norma Marin seldom seen anywhere, filmmaker Michael Maglaras reveals Marin's life, from his beginnings in New Jersey and his early experiments in watercolor, to his days at Cape Split in Down East Maine, where, with his late oils and watercolors, he established himself as one of the preeminent masters of American art.

John Marin: “Let the Paint be Paint!” was written, narrated and directed by Michael Maglaras. Terri Templeton is executive producer. This film was shot on location at the Colby College Museum of Art in Waterville, Maine and at Marin’s summer home on Cape Split in Addison, Maine, where he produced some of his most outstanding and memorable work. The Colby College Museum is the world’s single largest publicly displayed museum collection of Marin’s work and many of these pieces are featured prominently in the film.

A national tour is planned for 2010. Next stops for this film include the New Britain Museum of American Art in New Britain, Connecticut and the National Gallery of Art in Washington, DC. 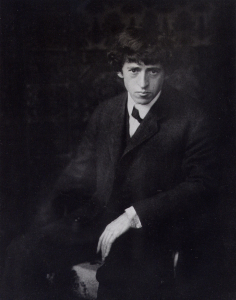