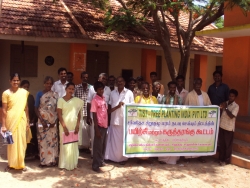 CAAC president, Ben Henneke, commented, “The validation we just received is a major step forward for TIST farmers in India and Africa who have already planted more than 7 million trees. Ten years ago energetic subsistence farmers and CAAC started to develop the technology and organization to link thousands, and eventually millions, of farmers to the international carbon markets. The financial incentives the market provides encourage the farmers to improve their local environment, combat deforestation and climate change, and better their own lives through one simple solution – planting millions of trees.”

Farmers in The International Small Group and Tree Planting Program (TIST) combat the largest source of greenhouse gas emissions in the world; deforestation and poor agricultural practices. Working together, TIST farmers can reverse their contribution to climate change and become an important part of the solution.

TIST’s goal is to address environmental change and poverty by providing men and women in developing countries with new sources of income from their trees, by connecting them to the global carbon market. TIST provides an infrastructure for training on topics such as nursery development, tree planting, Conservation Farming, fuel-efficient stoves, nutrition and preventative health education. TIST empowers the farmers to take action to change their lives, communities and the world.

A critical ingredient to CAAC’s ability to access the carbon market for thousands of individual small-hold farmers is TIST’s commitment to transparency and accountability. TIST has developed an award-winning monitoring system to track the farmers’ progress and results. Using hand-held computers and GPS, highly trained farmers visit each tree grove and record the location, number, size, and species of live trees. The data, including pictures, is uploaded onto a central database using cell phones or Internet, and can be viewed by the public at www.TIST.org.

TIST currently works in India, Kenya, Tanzania and Uganda. Today there are over 50,000 farmers in the program, over 7 million trees in the ground, and 6,000 more being planted each day. TIST plans to expand to a number of new countries over the next five years to respond to the requests of farmers and governments to help reverse the damage of deforestation.

CDM is a program under the United Nations international treaty for global climate change, the Kyoto Protocol. CDM allows projects in developing countries to create carbon credits that can be used by industrialized countries to comply with their greenhouse gas reduction commitments.