Saman Hasnain Heads Up Fast Growing International Film Company with the Release of 10 Films in 2010. 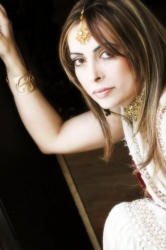 San Jose, CA, April 06, 2010 --(PR.com)-- Saman Hasnain, CEO of S&S Films International, wants to start a revolution in her homeland of Pakistan... albeit a peaceful revolution on the silver screen.

Hasnain, who also founded WIN Pakistan and was 2008 Mrs. Pakistan World, wants to use her art as a filmmaker and entrepreneur to affect change in her homeland of Pakistan while also educating the world about the role women play in the Pakistani culture.

“Having a platform to tell stories and, at the same time, educate people about Pakistan and its people, is something I’ve wanted to do all my life,” said Hasnain. “Through film, I have the opportunity to reach millions of people and teach them about a beautiful culture and people. I believe Pakistan has been misrepresented to the world and I hope to change those perceptions.”

Hasnain and her partner, Sean Ali, have teamed up to create “S&S Films International.” S&S is dedicated to making movies that explore issues facing Pakistanis today, as well as work to change misperceptions and offer support to organizations working towards affecting change.

Hasnain and Ali’s movie credits include: “51%”, a movie on women’s rights and is the first time a movie on this subject will be released worldwide in 2010; “Crossing Borderlines”, the story about Afghan refugees in Pakistan; and “Blind with Vision”, about hardworking blind people of Pakistan. Other S&S films ready for release include: “The Cotton Pickin’ Truth About Slavery” and “RUSH – Today’s Youth and Drugs” directed by John Jay.

Hasnain also is the founder of WIN Pakistan, an organization committed to educating, inspiring and empowering women in all walks of life, especially those women tormented by the pain of abuse or in need of purpose within their lives. WIN Pakistan works in association with WIN Foundation, an international organization created by Dr. Tracy Kemble and endorsed by U.S. Secretary of State Hillary Clinton and California Governor Arnold Schwarzenegger.

Hasnain, the mother of two boys and originally from Lahore, Pakistan, also was awarded a position on the panel of judges for all “Mrs. Globe” national and international beauty pageants, one of the most well-respected and reputable beauty pageants for women.

Recently, Hasnain and WIN successfully crusaded for a change in the Mrs. Globe swimsuit competition and called for the elimination of this competition in the national and international pageants. The move opens the door for more Muslim women interested in competing in beauty pageants, as well other women not comfortable with that element of the pageant.

Hasnain also was honored recently by GEO TV and “Safeer-e-Pakistan." Hasnain was honored as “Woman Achiever of the Year” and given a lifetime advisor position by the popular channel and most watched TV program by Pakistanis in the U.S., UK, Canada, Pakistan and Far East.

Currently, Saman Hasnain resides in San Jose, California and is available for interviews. For more information visit: www.winpakistan.net or WIN PAKISTAN on Facebook.com.