HomeownersInsurance.org has released an infographic displaying the past 30 years of worldwide deaths from natural disasters, sorted by continent. 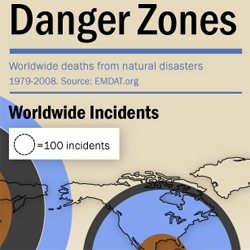 Roanoke, VA, April 22, 2010 --(PR.com)-- HomeownersInsurance.org has released an infographic displaying the past 30 years of worldwide deaths from natural disasters, sorted by continent.

The data, collected by the Center for Research on the Epidemiology of Disasters (CRED) and available online at The International Disaster Database (EM-DAT), shows the vast majority of deaths caused by natural disasters in the last 30 years occurred in Asia and Africa. CERD estimates that in the year 2003, 1 in 25 people worldwide was affected by natural disasters.

Drought was the deadliest natural disaster in that time period, responsible for more than 550,000 deaths since 1979. Nearly all deaths related to drought occurred in Africa, with more than 300,000 of those deaths attributed to the devastating famines in Ethiopia in the mid-eighties.

Overall, more than 2 million deaths have been attributed to natural disasters since 1979, with Asia suffering the heaviest losses. Earthquakes, tsunamis, floods and storms all killed more people in Asia than on any other continent. Droughts and epidemics were deadliest in Africa, while extreme temperature was deadliest in Europe.