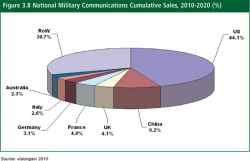 London, United Kingdom, May 24, 2010 --(PR.com)-- The worldwide military communications market was worth a total of $15.2bn in 2009 with continuing demand in the global marketplace from 2010 onwards, new market research available on ASDReports.com.

Modern armed forces operating on the network-centric battlefield of the future will depend on having access to the most advanced equipment, particularly in the field of communications.

Information must be acquired, processed and shared in real time if highly mobile adversaries are to be defeated. Advanced communications systems are also essential for minimising casualties by helping to remove friendly forces from harm's way. Acquiring improved capabilities for distributing data, video and voice information therefore looks set to remain a high priority.

The private sector has come to play an increasingly important role as a supplier of commercial products that meet military requirements, particularly in the US. Officials at defence ministries around the world have come to understand the potential cost-saving benefits of turning to commercial off-the-shelf (COTS) products rather than seeking bespoke military solutions.

Embracing COTS products has emerged as a way of meeting the needs of military personnel while reducing research-and-development (R&D) costs. As defence budgets have come under greater pressure with the onset of the global economic downturn, this trend has continued.

The analysis concludes that the global military communications market is a growing marketplace offering opportunities that are likely to see a range of companies realising commercial success, from major defence contractors and commercial satellite service providers to niche electronic components and subsystems suppliers.