Abhav LLC based in Cambridge, MA partnered with New Indian Express group to release the first official version of iPhone and iPad app for readers in and outside India. 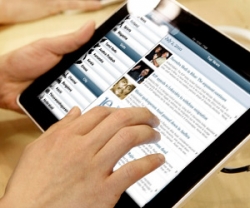 Readers can download the apps by following the link

"We expect the specially developed iPhone app to extend our reach to one of the most popular phones on the planet, and to markets outside India."

"Abhav has built some outstanding iPhone and iPad apps, and we are glad we partnered with them for this project," said Krishna.

"We are excited to release the first official India newspaper app for iPhone and iPad. It is a great pleasure and experience to work with New Indian Express group," said Shiva Subramanian, President of Abhav LLC

Abhav LLC, based in Cambridge, Mass., is a technology consulting company specializing in iPhone and iPad apps and have launched several mobile app products of their own in stores. For more information please visit
http://www.signa.mobi

About the New Indian Express Group

The New Indian Express is published from 21 centres spread over the four southern states of Tamil Nadu, Karnataka, Andhra Pradesh and Kerala, and Orissa.