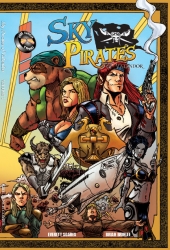 Warwick, RI, July 27, 2010 --(PR.com)-- Comic Promoter Susan Soares announced this week the detailed plans to market and promote the agency’s first title to achieve national distribution. "Sky Pirates of Valendor," a 148-page fantasy graphic novel published by Free Lunch Comics, is scheduled for national distribution through Diamond Distributors and will be solicited in the August issue of Previews Magazine.

To market the graphic novel to readers across the United States, SJS Comic Promotions has confirmed two initiatives that will increase exposure and generate additional sales. Members of the creative team will travel across several states for in-store appearances in prominent comic book retailers. Along with talking to customers about the graphic novel, attendees can also expect complimentary sketches, exclusive artwork and an opportunity to purchase "Valendor Chronicles," an anthology of short stories that offers readers a dynamic glimpse at the fantastical world of Valendor, its numerous races and rich history.

The schedule of appearances is as follows:

Comic book retailers interested in purchasing this exciting steampunk fantasy graphic novel can do so in the August issue of Previews Magazine. The order number for "Sky Pirates of Valendor," is AUG101028, appearing on Page 284 in the order catalog. Fans interested in joining the Valendor Dream Team can do so by sending an email to SJS Comic Promotions at susan.soares1971@gmail.com. Members of the media are invited and encouraged to contact SJS Comic Promotions to schedule interviews with members of the creative team. To learn more about "Sky Pirates of Valendor," visit the title’s website at http://www.skypiratesofvalendor.com or on Facebook.