The recently released independent comedy film, Hitting the Nuts: The True Story of the Scott County Series of Poker, is on the verge of becoming a cult hit within the ever-growing international poker community. 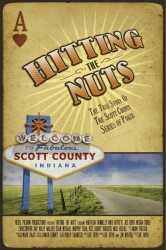 Cincinnati, OH, April 28, 2011 --(PR.com)-- The independent comedy film, Hitting the Nuts: The True Story of the Scott County Series of Poker, is quickly garnering praise within the international poker community just a week after its DVD release.

The movie was released on DVD via www.hittingthenuts.com on April 15th. Joe Boyd, the producer and director, says, “Since last Friday we have sold over half of our initial run of DVDs. Hundreds were pre-ordered and it hasn’t slowed down since our release on the 15th.”

As the DVDs went out, the reviews and comments from the poker blogs and notable poker players began pouring in. Chad Holloway, Senior Writer for Pokernews.com, says he ordered the DVD and was “skeptical, as always.” However after viewing the comedy he said, “This is by far the best poker comedy out there and will no doubt set the standard. It blows The Grand (the 2007 comedy starring Woody Harrelson) out of the water. It combines the improv genius of Curb Your Enthusiasm with the mockumentary style of shows like The Office and Modern Family. Finally, a poker movie that got it right.”

The praise continues from Dan Harkenrider, the host of the Division of Poker radio show on ESPN Cleveland. Harkenrider says, “This movie nailed it. Very funny. An instant poker classic. It’s poker as it’s played everyday in America...it is poker’s version of Kingpin.”

James Guill of the poker blog, PokerJunkie.com, sums up his April 25th review this way, “Hitting the Nuts was a bit over the top at times, but so is our game. The town, its people, and even the game were totally believable, and had you not known this was a 'mockumentary,' you might think it was a true story. I would recommend that anyone go online and purchase a copy of this DVD.”

Perhaps the most notable fan of the surprise hit surfacing this week is Jeff Madsen. Madsen was the 2006 World Series of Poker Player of the Year, the most coveted title in the game. Madsen says, “Hitting the Nuts is without question the funniest poker movie ever made. The film is committed to making fun of poker and the crazy personalities who love this great game, and that makes it fun to watch. I enjoyed every second of it!”

The movie has also received recent critical success, winning both the 2010 Cincinnati Film Festival and the 2011 Derby City Film Festival. Kristopher Rommel, Founder of the Derby City Festival, notes that the movie is “one of the funniest films our festival has ever selected...an instant cult classic.”

Boyd says, “For now the movie is only available on DVD at www.hittingthenuts.com. We are shopping it for wider distribution. We have no doubt the right company will want to partner with us on this. You can just feel the momentum building day after day. People who love comedy and poker are eating up this quirky, funny movie.”

For more information on the movie including how to obtain the DVD, visit the official website at www.hittingthenuts.com.