Rex’s Chicken asked the technology market what is pos? When Rex's opened their new location in Oklahoma they installed a Apple iPad POS for Franchises. 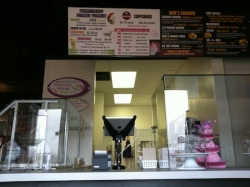 “It’s not often you can generate this kind of brand excitement in a community,” says David Rutkauskas, Beautiful Brands Founder, President and CEO. “We’ve heard nothing but positive responses from the people in Durant who have been anxiously awaiting our opening. People are looking in the windows and asking questions, and who could blame them? I believe this will turn out to be one of our biggest success stories.”