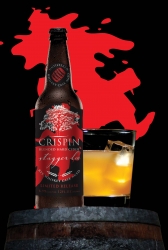 Over 400 different artists have recorded this song since the first recording in 1923.

Listen to it and we hear the evolution of modern music.

The song is "Stagger Lee."

With thanks to www.StaggerLee.com the definitive guide to the song and the myth of Stagger Lee.

Crispin’s 2012 annual whiskey cask aged hard cider, celebrates the song Stagger Lee, and the cultural creativity that spans the globe and lives for generations and over 100 years. The deep sense that music tells a story like no other and the timeless truth that music is often best enjoyed with something great to drink. Crispin Stagger Lee.

Unfiltered & blended from apple-wine straight from the rye whiskey barrels. Give a solid, firm bottoms-up tilt and swirl to disperse sediment evenly to best enjoy whiskey aromas and unique bouquet. Best enjoyed at cellar temperature, 50/55F, with or without 1 or 2 ice cubes.

Stagger Lee is most certainly worthy of aging in your cellar.

“To me cider is like music, and usually the sound in our heads at Crispin is all about guitars, drums, bass and a restless spirit,” says Joe Heron, Crispin Founder and CEO. “Stagger Lee, the cider, is all about the evolution of modern cider within an American idiom.”

About the Crispin Cider Company

The company is based in Minneapolis, MN & Colfax, CA.
www.FoxBarrel.com & www.CrispinCider.com