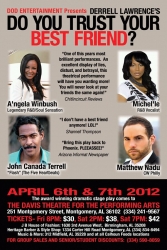 Newly engaged couple, Maurice and April couldn’t be more excited about their upcoming nuptials. While they have the love and support of their family and friends trouble stirs when the maid of honor confesses how she really feels about the groom. Watch as relationships are put to the test in this shocking and dramatic tale about commitment, trust, love, and lust.

This production will open your awareness to modern era relationships. An entertaining montage of musical and poetic gestures brings the play to life and captivates the audience with a fun, engaging, and powerful introduction that many lovers experience, but has an emotional twist that will make you wonder, “Do You Trust Your Best Friend?”

"Derrell Lawrence's 'Do You Trust Your Best Friend? is one of the year's most brilliant performances. An excellent display of lies, distrust and betrayal, this theatrical performance will have you wanting more!!!! You will never look at your friends the same again." - ChitlincircuitReviews.com

For tickets and more information on the cast, visit www.doyoutrustyourbestfriend.com or call the Davis Theater for the Performing Arts at (334) 241-9567.

About the playwright
Derrell Lawrence (September 18), born and raised in South Philadelphia, PA, is an American actor, filmmaker, writer, director, executive producer and upcoming author. Derrell has earned several awards including, The Highest Achievement for New Filmmaker at the Jokara-Micheaux Video and Film Festival in Georgia, as well as both The Silver Award and The People's Choice Award from the Philadelphia International Film Festival and Market for his first movie, "Life Isn't Fair." He produced another film, "Happy Holidaze," and also performed in numerous independent films and stage plays. "Derrell Lawrence's Do You Trust Your Best Friend?" is the first play Derrell has produced which already made a successful stop in Phoenix, AZ and Philadelphia, PA. He is currently co-starring in the film "Must Be The Music" directed by Charles S. Dutton (pre-production).
Contact
Tanya Brockenbrough
215-917-8914
www.doyoutrustyourbestfriend.com
Mary Wise
334-224-7569
wise_mary@yahoo.com