New Writer Picks Up Where E. Lynn Harris Left Off 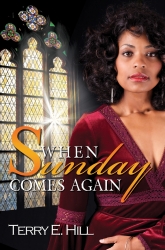 Oakland, CA, March 09, 2012 --(PR.com)-- Since author Terry E. Hill’s first novel was released in January 2011, readers have been waiting anxiously for the sequel. Come Sunday Morning has since been acquired by more than 1,000 libraries in the U.S., Europe, Australia and New Zealand and has been selected as best book of the month and year by book stores and book clubs across the U.S.

E. Lynn Harris introduced millions of readers to powerful black men grappling with their sexual identities and the women who stood by, and struggled with them. Harris’s untimely death in 2009 left a void in the literary world and had readers wondering who, if anyone, could pick up where he left off.

Many are now comparing Hill to Harris in his story content, writing style and storyline transitions. Hill’s first book rapidly turned into a hit with many loyal Harris fans. Although Hill’s books have a "down low" element his core messages run much deeper. They take us to the next level of discussion on topics such as power, infidelity and sexuality. The books also remind us that what's done in the dark will ultimately come to the light.

Hill’s subject matter has resonated with many readers because it mirrors several high profile scandals in prominent mega churches and in the military since the repeal of Don’t Ask, Don’t Tell. Hill denies events in his novels are based on real life situations. Never-the-less readers inevitably are left wondering who the characters in his books are based on.

In Come Sunday Morning, a beautiful pastor’s wife, Samantha Cleaveland, arranges the assassination of her husband Hezekiah T. Cleaveland in the pulpit of their mega church after learning of his homosexual affair. Samantha is installed as pastor of the church, New Testament Cathedral in Los Angeles, and the head of the international television ministry.

The sequel, When Sunday Comes Again, is scheduled for release on June 28, 2012. The story continues with Samantha being challenged by people who suspect she played a role in her husband’s death and Hezekiah’s lover, Danny St. John working to bring Samantha to justice.

Terry E. Hill’s latest novella, When Duty Calls, is featured in the Don’t Ask, Don’t Tell anthology released this month by national publisher Urban Books. When Duty Calls is the story of Four Star General Orpheus Beauregard Roulette III who finally acts on the homosexual urges he’s been suppressing for years and gets more than he bargained for. Now he finds himself caught between the crosshairs of his wife, who has her sights on the White House in 2016, and the young man who’s blackmailing him. "Not only are gays still being forced in the closet in the military but also at the highest levels of politics in this country," Hill said. "I wanted to show the effects this modern day version of prejudice has on us as individuals and as a nation."

Book reviews and more about Terry E. Hill can be found on his website at www.terryehill.com.