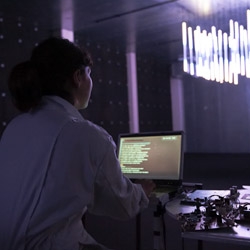 Erie, PA, July 14, 2012 --(PR.com)-- Secret Cinema, created by Future Cinema, took over 25,000 people into space in the month of June in central London. Secret Cinema presented Riddley Scott’s film Prometheus – it’s most groundbreaking to production to date. Live Cinema, the format defined by the creators of Secret Cinema, allows the cinema goer to step inside the film and creates a unique experience and journey, far beyond a traditional 2D or 3D viewing experience.

The line between actor and audience member is blurred. Audience members registered for various professions with a mysterious fictitious company called Brave New Ventures. Identities registered ranged from matter analysts to control operators and all were transported into the world of Prometheus with original props from the film including rover trucks, parts of the flight deck, and the cockpit.

The space ship’s computer system, called “Mother,” was provided by Zabaware, creators of the artificial intelligence software Ultra Hal. Like an actor, Ultra Hal put on the persona of Mother and answered queries from the audience. Audience members could go up to the “Mother” computer console and interact with it by giving it questions or commands in plain English. The system provided the audience with answers about the ship’s mission, crew, and would carry out various commands such as establishing communications with other crew members that were on the surface of an alien planet.

Zabaware is an Erie, Pennsylvania based company that specializes in artificial intelligence technology. Zabaware is the maker of the award winning Ultra Hal software, artificial intelligence technology that won the “most human” computer of the year in the 17th annual Loebner Prize Competition for Artificial Intelligence (AI). The software can give computers a personality using AI technology, speech recognition technology, and real-time animation. Ultra Hal is like an inquisitive child and is capable of learning new things from conversations based on complex natural language processing technology capable of statistically analyzing past conversations. The algorithms behind Ultra Hal have been in development for over 17 years.