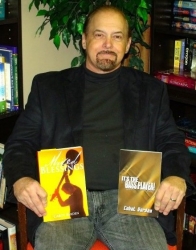 Talladega, AL, August 25, 2012 --(PR.com)-- Singer/songwriter/author Cabot barden will be holding a book signing of his two books, "It's The Bass Player" and "Mixed Blessings" at 10 am. at the Talladega Library in Talladega, Alabama on September 6th. He will also be giving a lecture on writing and publishing books at a noon luncheon there. Barden has been holding book signings all over the southeast. From Barnes and Noble bookstores in Birmingham to the Ernest Tubb Record Shop in Nashville, he has been on the road promoting his books. This will be the first book signing in the town where he lives.

His first book has been endorsed by his friend Clive Cussler and his second book has received a rave review from the New York Times. Barden's books are currently available through Barnes and Noble, BooksAMillion, Amazon.com and ekindle. An audio version will soon be available of Mixed Blessings. Barden is an accomplished songwriter who has had several songs on the radio over the years, as well as having some of his tunes originally designated to be used in a major motion picture. His first two books are fiction about a young man who plays in a pop band in the early seventies.

Barden is also sponsoring a Young Writers Competition in his hometown of Sylacauga, Alabama to help promote and inspire teens who like to write stories. When he isn't doing book signings he is busy working on his third book or playing at venues with his friends who belong to the local chapter of the Nashville Songwriters Association International.