A new type of "boneless" physical exercise, from the engineer behind Body Oars, and bodybuildinginWater.com, uses engineering sciences to deliver far more motion resistance against only muscle contractions, without driving it through joints. His measuring methods show how a bicycle also provides about 5 times more muscle exercise than running, for the same amount of cardio effort. 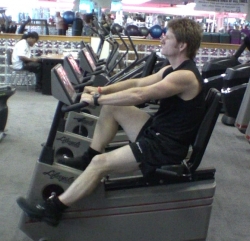 Columbus, OH, October 01, 2012 --(PR.com)-- According to a new fitness manual, written by the structural engineer behind bodyoars.com Craig Wise, "There is a consistent way to measure the muscle building efficiency of any physical exercise or device, and among many things, it exposes that bicycles offer nearly five times as much muscle building, as running, with only about 20% of the joint and spinal disk wear and tear."

That statement is based on running or cycling, for the same amount of time, holding the same heart rate, so the heart works just as hard doing either exercise.

That formula: "The percentage of all External Motion Resistance Energy, to any deeply exerted exercise method or device, that only opposes (fights) muscle contractions, is the same measurement of how efficient any exercise method can be at building, restoring and maintaining adult muscle."

He adds, "Almost all traditional exercise methods, aim their External Motion Resistance Energy at the mechanical functions of the skeleton, instead of just aiming it directly at muscle contractions."

Engineering science exposes that almost all modern exercise methods and devices squander far more of the External Motion Resistance (the real muscle building force), as it compresses joints and spinal disks, before it even reaches muscles.

The worst methods are popular cardio exercises like running, which load the knees with both body weight, and muscle effort, instead of only muscle effort.

The Force Mapping method that structural engineers use to see how forces will interact in buildings, before their construction, verifies that for every pound of G-force (body weight x impact), that an exerciser removes from their knees, another pound of muscle effort can be exerted into them, for the same amount of knee stress (compression, pain, damage).

While riding on a bicycle (wheeled or exercise), the seat supports the body weight, instead of the legs thus allowing the core running muscles to build up to exerting around five times more force than healthy running knees can physically accept, while also supporting body weight.

Because bicycles also cause far less spinal and hip compression, they also greatly reduce the spinal disk and leg joint damage of running, thus allowing adults (even adults who cannot run) to become and stay much stronger, far deeper into old age.

It is worthy of noting that per capita, the residents of the Okinawa Island, ride bicycles more than any other place on earth, and they also have the longest life expectancies on the planet.

If you have balance issues, a type of exercise bike called "Recumbent," should allow you to ride as securely and comfortably as sitting in a chair.

Surprisingly, his new manual provides a strong argument why all adults (at any age) that can run, need running exercise once a week, just to keep their walking and running ability strong and ready for action.

However, it explains that adults should only run 50-100 yards each week, that running long distances is only highly beneficial for children, because growing bones do heal stronger to better deal with common stress.

"If adults were shown why they only need to run 50-100 yards a week, and why they need to save their cardio workouts for bikes, or the ultra-efficient cardio methods in this manual, far more adults could run deep into old age," Wise added.

Force Mapping exposes that running and walking deliver less than 5% of External Motion Resistance Energy in direct opposition to core muscle contractions. It also shows that bicycles are nearly 25% efficient as long as the rider stays seated, making riding a bike about five times more effective at muscle building, than running or walking.

For sake of avoiding argument, Wise says his Body Oars are over 90% efficient at hard running only core muscles. They deliver every gram of External Motion Resistance in direct opposition to core mobility and abdominal contractions, which actually makes them 100% efficient.

All of the new exercise methods in this manual are water based. This is not because water is better, but because it can support body weight instead of joints and disks, while also providing maximum resistance in every direction, which made the engineering of all these new exercise methods and devices, far simpler and cost effective.

Because many of these new methods also require a life jacket, many people too old, obese or mobility hindered to run, swim or even ride a bike, can suddenly do maximum muscle exertion workouts, painlessly.

Before Wise's "Boneless" exercise methods, it was impossible for countless millions of mobility hindered people even build strong bodies, because they were only given methods that overloaded their skeletons to reach their muscles.

The first sections of the manual expose many of the fitness discoveries Force Mapping revealed, then it explains about 50 new exercise methods that deliver far more External Motion Resistance Energy in direct opposition to muscle contractions than any methods published before.

Bodybuilding in Water, by Craig Wise, is available only for a few months at $9.99 (only at Amazon.com) as a Kindle or eBook download. Trainer certification classes are planned to begin in December, and at that time this manual will sell for $89 as a download.
Contact
High Efficiency Fitness Company
Craig Wise
614-633-0860
www.bodybuildinginwater.com