For the seventh year, crooner Russ Lorenson comes home for the holidays with his annual show, "Christmas in San Francisco," for one performance only at 8:00pm on December 5th at The Rrazz Room at the Hotel Nikko, 222 Mason Street, San Francisco, CA, 94102. The guest artist for this year’s show is Broadway and cabaret star Karen Mason. 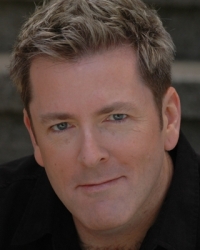 San Francisco, CA, November 11, 2012 --(PR.com)-- Skip the Christmas caroling this year and spend a cozy winter's evening with Russ Lorenson and his special guest, Broadway & cabaret star Karen Mason as they celebrate seven years of jazzy Christmases, San Francisco style! With songs by such great composers and lyricists as Irving Berlin, Johnny Mercer, Jule Styne, Sammy Cahn, and Frank Loesser, there's something for everyone in this swinging evening of jingle jazz.

About Russ Lorenson
Heard each year on "The Bay Area's Official Christmas Station - 96.5 KOIT-FM" with his recording of "Christmas in San Francisco," Russ Lorenson has established a reputation as one of the San Francisco Bay Area’s leading interpreters of jazz standards, with a sound and approach that place him at the intersection of Broadway, jazz, and pop – the very essence of the Great American Songbook. Jazz Review says that "Lorenson is not just a crooner covering the traditional Sinatra style or trying to be the next Connick; he is his own man."

Nominated for a 2007 MAC Award by the Manhattan Association of Cabarets and Clubs, Russ Lorenson’s passion for the stage started as a youngster, with a performing career that began at age seven in his home town of Philadelphia. As an actor he has appeared in award-winning musical productions with theatre companies throughout the US, and has toured with the National Theatre for Children. As a vocalist he has toured the US, UK and Europe, appearing in concert with such luminaries as Broadway stars Teri Ralston (Company, A Little Night Music, The Baker’s Wife), Karen Mason (Hairspray, Mamma Mia, Sunset Boulevard) and Dale Kristien (Phantom of the Opera), "Queen of Cabaret" Andrea Marcovicci, jazz diva Wesla Whitfield, and as the opening act for the legendary Eartha Kitt.

Lorenson is best known for his critically-acclaimed one-man, Benedetto/Blessed: Celebrating the Life and Music of Tony Bennett. Lorenson’s salute to the man whom Frank Sinatra called "the best singer in the business" premiered in 2006 as the opening act for the legendary Eartha Kitt. Since then, the show has enjoyed sold-out runs across the country, including San Francisco's Rrazz Room &, Empire Plush Room, Sterling’s Upstairs in Los Angeles, Milwaukee’s Wilson Center for the Arts, and New York's famed Iridium Jazz Club. His most recent one-man show, As Long As I’m Singin’: Russ Lorenson Celebrates the Music of Bobby Darin, sold out its debut run at San Francisco’s Rrazz Room in 2011.

Russ’ debut CD, "A Little Travelin’ Music," was released in May 2006 on the LML Music label and features songs from his show of the same name, and includes duets with special guests Shawn Ryan and Klea Blackhurst. His second CD, the jazzy holiday collection What I Want For Christmas, also on LML, has received extensive radio airplay in major markets across the US. Both CD's were included on the Nominating Ballot for the 2006 Grammy Awards in the category of "Best Traditional Pop Vocal Album" alongside such artists as Tony Bennett, Michael Bublé, and John Pizzarelli.

About Karen Mason
Karen Mason has starred on Broadway, Off-Broadway, television, and recording and "has few peers when it comes to ripping the roof off with her amazing voice that knows no bounds!" according to TheatreScene.net. Karen is a ten -time MAC Award winner and has won the MAC Award for Major Female Vocalist of the Year for six consecutive years. She has also won the 2006 Nightlife Award for Major Female Vocalist and has three Backstage Bistro Awards.

Ms. Mason most recently garnered rave reviews starring as The Queen of Hearts in Wonderland on Broadway. She originated the role of Tanya on Broadway in ABBA's Mamma Mia! and was nominated for a 2002 Drama Desk Award as Best Actress. Her other leading roles include Norma Desmond in Sunset Boulevard, which she performed to critical acclaim and standing ovations on Broadway and in Los Angeles for three years; Velma von Tussel in the final Broadway company of Hairspray; "Monotony" singer & Mazeppa in Jerome Robbins' Broadway; Rosalie in Carnival (another Drama Desk nomination); plus featured roles in Broadway's Torch Song Trilogy and Play Me A Country Song. Karen won the Outer Critics Circle Award for her performance in And The World Goes 'Round, and starred Off-Broadway in her own show, Karen Mason Sings Broadway, Beatles And Brian.

Karen has headlined Carnegie Hall, The Kennedy Center, Lincoln Center, Feinstein's at The Regency, Rainbow & Stars, the Algonquin, Arci' Place, The Supper Club and The Ballroom in NYC; The Cinegrill and the UCLA/ASCAP Concert Series in Los Angeles; The Plush Room in San Francisco; and Davenport's in Chicago. She has shared concert stages with Luciano Pavarotti, Rosemary Clooney, Liza Minnelli, Michael Feinstein, Jerry Herman, and John Kander & Fred Ebb, among others.

Her highly acclaimed recordings include her 2009 MAC Award-winning "Right Here/ Right Now," 2005's "The Sweetest of Nights," the MAC Award-winning "When The Sun Comes Out," as well as three other CD's: "Christmas! Christmas! Christmas!," recorded live at the West Bank Café; "Better Days," featuring songs by her longtime composer/arranger Brian Lasser (including the 1998 Emmy Award-winning song "Hold Me"); and "Not So Simply Broadway." Karen has been featured on the soundtrack of "Jeffrey" (Varese Sarabande), the studio cast recording of "Wonderful Town" (JAY Records), the original cast album of "And The World Goes 'Round" (RCA Victor), "The Child In Me, Vol. 1" (Harbinger Records), and "Lost in Boston ll" (Varese Sarabande).

Attention Calendar Editors:
Section: Holidays/Theatre/Music/Nightlife
What: Christmas in San Francisco with Russ Lorenson & Friends. Crooner Russ Lorenson celebrates the holidays with special guest, Broadway and cabaret star Karen Mason
When: Wednesday, December 5, 2010 at 8:00pm.
Where: The Rrazz Room at the Hotel Nikko, 222 Mason Street, San Francisco, CA, 94102.
Tickets: $30 in advance, $35 at the door, available by calling (800) 380-3095 or online at www.TheRrazzRoom.com.

Attention Reviewers:
Russ Lorenson and Karen Mason are available for interviews, and review copies of their CD’s are available through RL Productions at (415) 674-3863. Please contact George Russell (george@rl-productions.biz) to arrange.