New York, NY, July 27, 2007 --(PR.com)-- For the first time in history, an extraordinary lineup of musical artists will unite together on one stage in Jerusalem, Israel. Jerusalem Rocks! is a non-profit International music festival which will be set against the backdrop of the Teddy Kollek Stadium in Jerusalem on September 9, 2007. Much more then a concert, Jerusalem Rocks! is a cultural extravaganza celebrating the freedom of expression inherent in music and is committed to shedding light on Jerusalem as a beacon of peace.

According to Jacob Ner-David, Co-Founder and Executive Producer of Jerusalem Rocks!, “While there have been festivals for peace and unity in the past, there has never been an event like Jerusalem Rocks! that brings this caliber of artists together in the Holy City. Our goal is for Jerusalem Rocks! to draw concertgoers from all parts of Israel, as we plan to demonstrate the city's ability to host major performances annually.”

Jerusalem Rocks! is the dream of a group of individuals who see the importance of making culture available to all rungs of society. With a population of 725,000 including hundreds of thousands of students, youth and numerous Universities, the Jerusalem Rocks! organization feels that hosting an International musical event in Jerusalem was the perfect gift to Jerusalem – who hasn’t hosted a concert of this magnitude in over 20 years - and a perfect place to make a statement to the rest of the World.

Carmi Wurtman, Jerusalem Rocks! Event Producer and Co-Founder notes, “This festival marks the beginning of an unprecedented movement that we hope will not only re-establish Jerusalem as a cultural center, but will also trigger behavioral changes , inspiring others to “answer the call” to embrace cultural differences.”

On September 9, 2007, the Black Eyed Peas are set to return to Israel to headline Jerusalem Rocks! The Black Eyed Peas vocalist, Fergie, is scheduled to perform hits off her solo debut album, The Dutchess which boasts 4 consecutive top 5 singles and has sold millions of copies worldwide. Audiences will also be among the first to hear songs off of Black Eyed Peas front-man will.i.am’s upcoming solo album entitled, Songs About Girls, scheduled to hit streets on September 25th, 2007. Will.i.am comments, “I can’t wait to come back to Israel! The 2006 performance we did in Tel Aviv was one of the single best experiences of my life.”

Jerusalem Rocks! also promises heavyweight performances scheduled by the progressive hip-hop collective and two-time Grammy Award winning artists, Arrested Development. Social change advocate and Arrested Development founder, Speech proclaims, "This is a life long dream. I wrote back in ' 89 that my next stop after touring America was supposed to be touring in Jerusalem. Almost 20 years later, it is finally happening and we are excited."

The group that describes their sound as "Life Music” is best known for producing strongly spiritual , Afrocentric singles with a focus on positive viewpoints. The mega-hit singles, "Tennessee", “People Everyday" and "Mr. Wendal" helped to catapult the sales of over five million albums. In 2007, Arrested Development is premiering works off a new album entitled, Since the Last Time, scheduled to hit streets in September.

Other performances scheduled at the Teddy Kollek Stadium include a mix of local and International acts including The Commitments from Dublin, Ireland - the band whose album and soundtrack to the movie, The Commitments, has sold 12 million copies worldwide.

Festival (and Vonage) Co-Founder Jeff Pulver adds, "The festival is just before the Jewish Holiday Rosh Hashanah, giving extra incentive for people traveling to Israel for the High Holy Days to arrive a few days early to catch the concert in Jerusalem."

Jonathan Schwartz, Co-producer and Musical Director concurs, “Jerusalem Rocks! is a no-brainer. Jerusalem deserves a cultural event of this magnitude and we plan to continue this festival for years to come.” 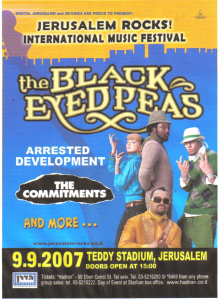