The Denan Project wins award in Peru. Plus a summary of the latest news from its other 3 projects. 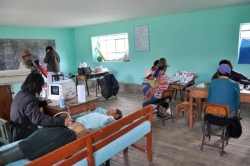 A free health center in Uratari, Peru, run by The Denan Project has been named the outstanding medical facility in the Peruvian state of Cusco by the state’s ministry of health. The award provided The Denan Project, an all-volunteer group headquartered in Woodbury, Connecticut, with a grant for $9,000 to continue its work in this poor, remote town in the high Andes. TDP’s health center, staffed with Peruvian medical personnel, has cut to zero the once-high rate of death in childbirth in Uratari. The center provides not only general and prenatal health care but also dental care for the area residents, who have never had easy access to any kind of medical or dental care.

Now TDP is working with the townspeople to develop cooperatives in partnership with the local government. One cooperative is focused on beekeeping, the other on raising Cuy (Guinea Pigs). When it’s available, Cuy is a popular meal in many of the Andean communities and in other countries in Latin America. In fact, it can even be found on the menus of the finest restaurants in cities such as Cusco and Lima. Historically, it has been a wonderful source of protein in the diets of the descendants of the ancient Incans.

TDP also works in other countries, using funds it raises from donors. The organization, founded in 2003 by a small group of friends and neighbors in Connecticut, first began its work by raising the funds to open a clinic to provide free medical care to the poverty-stricken people of Denan, Ethiopia. The clinic grew to become a small hospital, which has now treated more than 125,000 patients and has saved many lives. Recently, the hospital was named the outstanding medical facility in The Somali Regional State.

Recent developments in Denan include the completion of new TB in-patient housing facilities in the hospital and the funding of microloan projects to five groups of Denan residents. As fast as TDP made the loans, small local businesses were up and running. Even better, those loans have been repaid months before their maturity. This microloan program will be one of the key elements in leading to a modicum of eventual self-sufficiency for the people of Denan.

TDP is also at work in Tariat, Mongolia, where it has teamed up with Save the Children Japan-Mongolia to support the existing hospital in Tariat, which is located in the second coldest part of Mongolia. Now, and for the first time, the hospital has a doctor specializing in children's health care. Also, thanks to TDP, a dentist will soon be on site bringing free quality dental care to the residents of the area for the first time in their lives.

During the winter of 2010 and 2011, the year before the TDP program began, six children died in the hospital because of the extreme cold. During the winter of 2011 and 2012, not one child in the hospital died from the cold. This statistic alone has made TDP proud of its involvement in this area. Dick Young, TDP President, said: "This was accomplished by simply supplying medical treatment that allowed more oxygen to get to the brains of young children. The treatment was only available because of The Denan Project's participation." The Tariat hospital is the only qualified medical treatment center for the 10,463 children of Tariat and the surrounding soums, or districts. New TDP projects in Tariat include the establishment of a mobile health-education program to remote villages.

The Denan Project’s mission statement says that it is a nonprofit, grassroots organization whose volunteer members secure the necessary resources to provide free medical care, potable water, agricultural training, education, and other critical services for the people of Denan, Ethiopia and the surrounding villages, and to other impoverished communities in the developing world. Besides its programs in Ethiopia, Mongolia, and Peru, it has a medical clinic in Burkina Faso, Africa. President Dick Young explained that: “TDP works with regional government and non-governmental agencies with the ultimate goal of making specific communities in these areas self-reliant by developing and implementing long-term, sustainable solutions.”

People who are interested in finding out more about The Denan Project’s work or who may want to donate or volunteer, please go to thedenanproject.org.