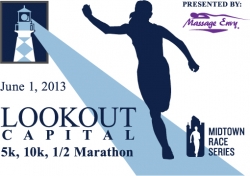 The deal awards Lookout Capital the event naming rights. The race will be called the Lookout Capital 5k, 10k, 13.1 presented by Massage Envy. In conjunction with the sponsorship, the event will promote Lookout Capital and their services throughout North Hills and Midtown Raleigh, featuring the firms brand on all of the event’s communication materials leading up to the June 1st race.

In conjunction with their sponsorship, Lookout Capital Managing Partner, Merrette Moore, has selected Marbles Kid’s Museum to be a race beneficiary as a part of the race’s Charity Challenge which exists to support local charities.

“We are thrilled to have Lookout Capital as the title sponsor of our next event,” said John Kane, Founder and CEO of the Midtown Race Series, “Lookout Capital, its Principals and Investors are some of the most esteemed members of our community and we couldn’t be happier about the partnership. Their commitment to supporting a healthy and active lifestyle and Marbles Kid’s Museum should be commended.”

The Midtown Race Series was established in 2012 to produce a series of first class running events that start and finish at North Hills in Raleigh, North Carolina. The race series will feature two events in 2013, the Lookout Capital 5k, 10k, 13.1 on June 1st and a second event featuring a 5k, 10k, and 13.1 on September 21. Each race will showcase one of the city of Raleigh’s greatest assets, the greenway.

“Lookout Capital is proud to team up with the Midtown Race Series as the title sponsor of the June 1st race,” said Merrette Moore.

“We’re excited to be a partner for all participants in the upcoming Lookout Capital 5k, 10k, 13.1 and share in the runners’ passion to be their very best.”

Participants can sign up for the race at www.MidtownRaceSeries.com.

About Lookout Capital: Lookout Capital is a Raleigh, NC-based firm that provides growth and expansion capital to up-and-coming startups as well as small, successful companies, primarily in the Raleigh-Durham area and throughout North Carolina. The firm addresses a niche historically and currently underserved by the capital markets. Lookout leverages its high caliber network of investors and advisors as well as its unique investment model in establishing the premier growth capital investment management platform in North Carolina.