Just Released -- Shadow of Light -- Have You Ever Wondered Where You Go During the Height of Sex? The Ancients Knew.

There is no refuting the complete and utter abandon of sexual climax, but there is more going on than our current leagues of scientists will publicly admit to. Prepare for an upheaval of the paradigm through Shadow of Light, a tale that breaks down the patterns that are no longer serving and by example offers new hope. 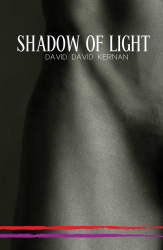 Los Angeles, CA, April 25, 2013 --(PR.com)-- Shadow of Light, a debut novel by David David Kernan (DDKBooks, Los Angeles 2013), a journey of mind, body and soul, answers that very question. It is 1993, Los Angeles, and David, a newly divorced makeup artist, finds himself at a coffee house contemplating an espresso and a flirtatious waitress, when a beautiful man, Daniel, asks to join him. But Daniel is not what he seems.

Even after David finds out who Daniel really is, he is unable to deny or suppress his surprising, even innate attraction to the other man, and embarks on the most emotionally charged and spiritual journey of his life, maybe his whole existence.

Within the throes of passion David is made to realize the extent and purity of another facet of existence, a realm wholly attainable by every human on the planet, but purposely suppressed by dogma the world over.

While religion, politics, science and philosophy play integral roles throughout Shadow of Light, it is Shadow’s intimate relationship between two men, in all its thought-provoking tenderness and mystery, its sublime realizations of heart-felt truths that bring home its entirely progressive point: that within those precious seconds of rapture the human soul is connected to another place, in fact another dimension, and completely free of the rigors of mortality; in other words, completely free of everything associated with the physical.

Where organized religion is concerned, Shadow of Light is not kind, and denounces religion’s overbearing redefinition of God while deposing their reign over morality, more precisely religion’s monopoly on the morality of sexual relations, and reveals a long-held secret that has from the beginning purposefully kept mankind from reaching his inherent spiritual potential.

“Anyone who has ever experienced an orgasm,” says Kernan, “which pretty much means every adult on the planet, knows exactly what I’m on about. There is no refuting it: the complete and utter abandon—and even those words, as expansive and infinite as they imbue, don’t do the experience justice. At the same time this ability hasn’t ever been given meaning over and above what it is to the individual; but there is more going on than our current leagues of scientists will publicly admit to. Daniel revealed this … and much more.”

About David David Kernan
Born and raised in Los Angeles, Mr. Kernan was once a makeup artist in the entertainment industry. He is now a writer with one previously published work, Angel Claire: An autobiographical work of poetry, commentary and pen & ink (DDKBooks, Los Angeles 2000). Mr. Kernan devotes his time to writing and family.

About DDKBooks
DDKBooks is an independent publishing company specializing in esoteric poetry; fiction, including gay romance; and nonfiction; with many titles incorporating the use of Wicca, the Tarot, Astrology, and Necronomiconic influences.
Contact
DDKBooks
Susanne Rheinschild, Publisher
1-661-871-3352
http://www.ddkbooks.com
To receive a review copy, please call 1-661-871-3352 and leave your full name and affiliation, your complete address, a number where you can be reached, and your email. Thank you for your interest in Shadow of Light.