Celestine Publishing Unveils "Why Things Are The Way They Are" by Author, Vinny DiGirolamo

Celestine Publishing announced the release of “Why Things Are The Way They Are: Navigating Your Own Discovery of Things We Are Meant to Know.” Author Vinny DiGirolamo introduces new concepts regarding a natural order of truth and its principles for all religious persuasions and a method for learning the things God meant for us to know. This work is written for the avid student of the scriptures and if you want to know why things are the way they are, this book is for you. 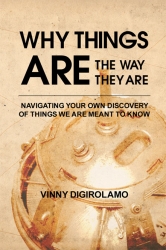 Raleigh, NC, August 09, 2013 --(PR.com)-- Celestine Publishing (www.celestinepublishing.com), released Author, Vinny DiGirolamo’s latest publication, “Why Things Are The Way They Are: Navigating Your Own Discovery of Things We Are Meant to Know.”

“Why Things Are” introduces a natural ordering of the doctrines and principles of the gospel in Latter-day Saint terms, but “its concepts apply universally to all religious persuasions,” says DiGirolamo. “Over the years cataloging thousands of principles, I started to group them logically into several different relationship categories. As I did this, I noticed that there were also different types of principles and organizational patterns started to emerge naturally and unexpectedly.”

“Why Things Are” describes eight relationships all doctrines and principles describe, twenty five different types of principles and fifteen patterns that embed them in the scriptures. DiGirolamo describes each one and introduces a step-by-step process for discovering truth in a principle-centered approach to studying the scriptures. He uses a real-time example the reader can work through to illustrate how the process works and then provides a reprint of his article, titled, “Three Words: The Only Difference Between Latter-day Saint Beliefs and All Other Religions,” as one example of why things are.

The “Principles with Promise” series by DiGirolamo was first published in 2006 and serves as topical reference books for students, teachers, scriptorians and researchers alike. “Why Things Are” is a catalog of the findings and observations made during the evolution of that series.

“Though I began making these observations almost thirty years ago, I felt compelled to finish it now,” he continued. “As you’ll see in the book, there are a few authors that have addressed aspects of its contents already, but this is the only place I know of that this material is presented as an organized construct; something more intentional as though God intended it to be so from the beginning.” DiGirolamo concluded, “If you love to study the scriptures, 'Why Things Are,' 'Grace Divine,' and 'Principles with Promise' are great companion volumes.

“Why Things Are The Way They Are” is available through Celestine Publishing or www.createspace.com. Celestine Publishing, established 2002, is based out of Raleigh, NC and is the publisher of the “Principles with Promise” series; topical guides that catalog thousands of scriptural doctrines and principles for Latter-day Saints, Catholics and the rest of the Christian world. Celestine’s website also contains links to other nonfiction and fiction titles, the Principles with Promise series, and several blog articles on a variety of scriptural, principle-centered and real world topics by Vinny DiGirolamo.
Contact
Celestine Publishing
Vincent DiGirolamo
919-830-8468
www.celestinepublishing.com
9660 Falls of Neuse Road
Suite 138, #146
Raleigh, North Carolina 27615

Why Things Are Press Release