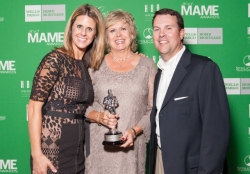 Each year, the Marketing and Merchandising Excellence (MAME) Awards honor the top achievers in the new home industry. The black-tie event, held at The Denver Center for Performing Arts on Sept. 14, honored the top marketing, sales, interior design, architectural and builder awards.

In addition to the Skyestone award, the Denver home builder was also recognized for “Sales Associate of the Year” and “Marketing Manager of the Year.”

“We’re extremely proud of both David and Becky, who demonstrate their professionalism and expertise everyday,” said Kip Gilleland, president of Taylor Morrison’s Denver division. “We’re also excited for the recognition our new 55+ community received. Skyestone has been a team effort for our division since the beginning and we’re happy to share this honor with the rest of the Denver division.”

Located in Broomfield, Skyestone is Taylor Morrison’s first 55+ community in the Denver area. According to Gilleland, Skyestone is different from other communities because it was designed that way. Instead of following the typical path to creating a 55+ community, Skyestone representatives set about turning the concept on its ear, listening to real Colorado residents about the needs and desires of their lives and their communities. That input has been used throughout the community, from walking trails and community gardens to the design of the homes and community center.

“We’re proud to be recognized for all of the hard work we’ve put into the community,” Gilleland said.

For more information on Skyestone, Terrain or any other Taylor Morrison Denver community, please visit www.taylormorrison.com.