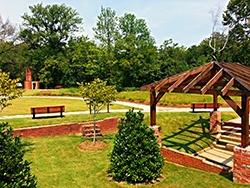 Charlotte, NC, November 19, 2013 --(PR.com)-- It could be argued that Southern barbecue was invented at Melton’s Barbecue Restaurant in Rocky Mount, North Carolina in 1922. For more than 75 years Melton’s endured flooding, fires, and other catastrophes until it finally succumbed to Hurricane Floyd in 1999. Faced with a dilapidated piece of property along the Tar River, visionaries within the City of Rocky Mount implemented a plan to turn the ruins of Melton’s Barbecue into a community park that honors this important landmark in the State’s history.

Working with virtually no budget, a volunteer team consisting of several City departments, engineers and designers from WK Dickson, three Eagle Scout candidates and countless others from the community turned the site into a valuable and important public asset.

The project provides a recollection of Rocky Mount’s barbecue tradition and a place for families to gather. It is equipped with a fishing pier, a passive walking trail, constructed wetland, arbors, the preserved fireplace and cook pit, interpretive signs, and a renovation of the structure surrounding the historic natural spring.

Brad Kerr, Director of Engineering for the City of Rocky Mount, is excited about Barbecue Park and strongly believes that Rocky Mount residents relish the idea. Perhaps Mr. Kerr said it best when he stated, “We are putting this land into productive use in honor of Rocky Mount’s past. And the park, which we began working on in March, 2012, has been an incredibly successful collaboration - completed due to the efforts of Parks and Recreation, the Public Works Department, WK Dickson, the Eagle Scout candidates and donations of labor from many, many others."