The Bodega Bay Area Chamber of Commerce (BBACC) welcomes the public to experience Hitchcock in the town made famous by him. The 2nd Annual Hitchcock Film Festival will take place on March 28-29 and proceeds benefit area schools art programs. 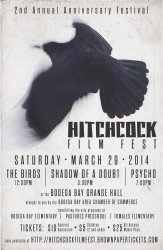 For your movie going pleasure, the Grange Hall in Bodega Bay is transformed into a fun theater, and moviegoers will have the opportunity to peruse Hitchcock memorabilia, and get their photo taken in a "Hitchcock” themed photo booth. Dan Sneed, Hitchcock enthusiast will speak about the making of each movie. Concessions and souvenirs will be available for purchase.

All ticket purchasers will be entered into a drawing for a prize package worth over $500 including 2 nights in the Happy Camper at a local campground, a Cedar Enzyme Bath for 2 at Osmosis Day Spa, and the Party Girl Diet's Signature "Party in a Box" (with everything you need to get the party started including: red wine chocolate, and healthy snacks to keep the party going.)

Forecasted to be a sold out event, the public is also invited to attend the Hitchcock Film Fest Gala on Friday, March 28, a black tie optional kickoff party taking place at 6 p.m. and hosted by the BBACC at the Bodega Harbour Yacht Club. Guest are in for a “premiere night” of cocktails, heavy appetizers, and a chance to mingle on the red-carpet (complete with professional paparazzi) while enjoying live music amidst the a backdrop of a tribute screening of Hitchcock’s famous 1960′s thriller “The Birds.” Naturally, movie theater style popcorn is also on the menu.

March 28 Gala Event Tickets are $50 per person and include hors d’oeuvres, cocktails (2 drink tickets) and popcorn for the movie.