JPEG the Movie, a Screenplay by Greg Ó' Braonáin & Patrick McLaughlin Has Advanced Into the Finals of the 2013 Fresh Voices Screenplay Competition

Two Irish authors conceive and write ".JPEG the Movie" Screenplay which suggests the photographs we take of each other may take a piece of our soul as some ancient religions believe. McLaughlin and O'Breonian go even further in .JPEG and feel cameras of the future may actually do this, and the images when combined could "replicate" an individuals physical and conscious being! 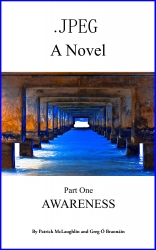 Virginia Beach, VA, April 01, 2014 --(PR.com)-- .JPEG – The Movie, a screenplay by Greg Ó' Braonáin and Patrick McLaughlin has advanced into the Finals of the 2013 Fresh Voices Screenplay Competition chosen from over 1,500 scripts submitted in 2013.

Fresh Voices made the announcement in a statement released March 25, 2014 which says, “We had approximately 1,500 submissions this year, and there are now less than 75 scripts in contention for the coveted Grand Prize Award. To have made it this far in the competition is a fabulous achievement, and you have clearly proven your ability to craft memorable characters and tell an engaging story with a unique voice.” .JPEG has also been included on the shortlist of “The Spotlight Awards” for “Best Not Written in USA” and “The Courage and Fortitude Award”. The Spotlight Awards are designed to highlight special achievement in screenwriting and bestow further accolades on talented screenwriters. The winners in all categories will be announced on April 8, 2014.

The story of .JPEG – The Movie is based on phenomena where some believe if you take a photograph of a human, you steal a piece of their soul. Patrick McLaughlin, a professional photographer with a background in defense and technology, first conceived of the idea when he realized he had never deleted any images of his friends or loved ones in case there was any truth to this myth or spiritual believe. After years of following this “rather be safe than sorry” practice, Patrick recently considered, “When you bring the proven known theories of quantum physics together with the coming advancements of 3D copying, holograms of famous people, and much of the new technology being developed by National Security Agency and the Central Intelligence Agency, we could indeed someday 'replicate' an individual’s body, mind and soul. Take moment and think of all the crazy things Jules Verne wrote about and you begin to believe this might occur in the near future!” Unlike the “Star Trek – Beam Me Aboard” teleporter which simply takes someone apart and puts them back together again, Patrick feels one day incredibly powerful cameras could capture our “quantum make up” and as we do now with one dimensional images, make endless copies of the person. Mr. McLaughlin guesses, “Unlike cloning which only reproduces the genetic being, 'replication' would copy memories, consciousness and the very soul of the subject.”

Friends since childhood, both Gregory Ó' Braonáin, an award winning writer for the Irish Television series, Ros na Rún and who lives in Galway, Ireland, and Patrick McLaughlin of Virginia Beach, Virginia, came together to research and complete the project .JPEG – The Movie clearly understanding it would be a once in a lifetime opportunity to work closely as best buddies. Neither Greg or Patrick ever expected their screenplay, “JPEG – The Movie” to gain such recognition from such a prestigious screen writers competition.

.JPEG – Part One: Awareness was recently published as a novel on Amazon.com and can be found by entering .JPEG in the books search area.

Fresh Voices is a consortium of established industry professionals providing emerging writers with the tools, guidance and opportunities necessary to succeed, while offering the industry a trusted conduit for fresh new material. We strive to discover, encourage and promote the most promising voices in storytelling.
Contact
M Force Media
Patrick McLaughlin
757-831-1277
www.mforcemedia.com

﻿.JPEG - The Movie, a screenplay by Greg O' Braonáin and Patrick McLaughlin has advanced into the Finals of the 2013 Fresh Voices Screenplay Competition chosen from over 1,500 scripts submitted in 2013.