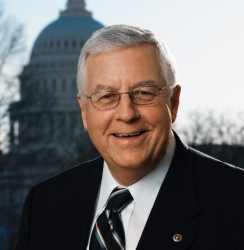 Washington, DC, June 09, 2014 --(PR.com)-- The National Capital Area Council (NCAC), Boy Scouts of America (BSA) will honor Senator Mike Enzi, (R-WY) as the 2014 “Good Scout” at the 2014 Champions of Character Dinner on June 18, 2014. This award is to recognize Senator Enzi for his outstanding service in supporting Scouting opportunities for local youth.

“Michael B. Enzi was sworn in as Wyoming's 20th United States Senator on January 7, 1997. Enzi has made a name on Capitol Hill for his unique way of breaking down party lines and working across the aisle. …Enzi believes that people can agree on 80 percent of the issues 80 percent of the time and if they leave the other 20 percent out they can get a lot done. With that mentality he has turned one of the most contentious Senate committees into one of the most productive…. Enzi is an elder in the Presbyterian Church and taught the high school Sunday school class for more than 10 years. Enzi's love for Wyoming grew as he became an Eagle Scout. He has been honored as a Distinguished Eagle by Scouts and Significant Sig by Sigma Chi Fraternity. He is an avid hunter, fly fisherman, bicyclist, and reader. He is a past co-chair on the Congressional Sportsmen's Caucus. He and his son Brad built their own canoe as a family project. He was a youth soccer coach for 10 years.” - -www.enzi.senate.gov/public/index.cfm/senator-s-biography

The dinner is open to the public and sponsorships are available at www.NCACBSA.org/champions. Proceeds from the dinner will benefit Scouting and Learning for Life programs for youth in the District of Columbia, including the campership program that helps Scouts attend summer camp. NCAC’s Washington, D.C. District is providing Scouting and Learning for Life opportunities in all 8 wards through partnerships with local community organizations. www.NCACBSA.org/champions
Contact
Washington, DC District, National Capital Area Council, Boy Scouts of America
Dan Mullin
202-285-9911
www.NCACBSA.org/group/WashingtonDC