The Behind the Scene Story of Beyoncé and Destiny's Child Rise to Fame. 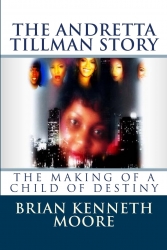 After years of silence, Brian K. Moore finally sets the record straight about the making of the international phenomenon, Destiny's Child. In his new book "The Making of a Child of Destiny: The Andretta Tillman Story, Moore," former co-manager and partner of Tillman, tells the unforgettable story of her journey that led to the overwhelming success of Beyoncé Knowles and Destiny's Child. For years, Matthew Knowles has been thought to be the driving force behind his daughter's stardom, but this heart-wrenching tale exposes the behind-the-scenes reality of Destiny's Child's rise to fame and how it was actually Tillman that created and managed the group until her untimely death in 1997. In his long-overdue book, Moore details how Knowles maneuvered his way onto the management team and the struggles that went with it. Moore writes, "No one can argue that [Tillman] indeed was a launching pad and catalyst to their success and for her to miss out on this night was disheartening to say the least."

Speaking to the fans, he also sheds light on the difficult childhoods of Latavia Robertson and Kelly Rowland, and divulges many other never before heard facts about this remarkable true story. Moreover, this book touches on events along the group's journey to destiny that still have an impact on Beyoncé and the other members today.

In 1997, a girl group like none ever before took the world by storm. Now, the true story will be told for the very first time. "The Making of a Child of Destiny" is a tale of hope, faith, and triumph, and a testament to what can be achieved when one dares to dream. Tillman's son, Armon, has stated, "When I heard Kenny Moore would finally write a book on how my mom created and managed Destiny's Child, it was all I could do to say 'it is about time'." The book also features the documented words of Beyoncé and the other group members affectionately thanking "Ms. Ann" for guiding them through to success; from Star Search all the way through to the Elektra deal, and finally to their Sony deal.

With 17 years having passed since his time spent working with the group, Moore remarked, "I knew reminiscing on those days of giving Beyoncé and the other members of Destiny's Child their big break, and my friend Andretta Tillman, would be a difficult undertaking." The final product is a passionate book, dedicated to the truth, and the whole truth. From the joys, to the set-backs, the defeats and triumphs, the heartbreak and the loss. The Making of a Child of Destiny is a special piece of work meant to honor a great woman, and to finally offer the public the answers to questions they have been asking for years. With their destiny fulfilled, it's time to let the truth be heard.

Brian K. Moore served as the co-partner of Tillman Management as they developed the careers of the girl group sensation, Destiny's Child. Moore later joined Andretta Tillman and Matthew Knowles to form Music World Entertainment, where he remained until Tillman's passing. Moore now leads Dousic Entertainment, one of the most innovative artist management companies in the industry. He has also been a visionary on the subject of how social media can impact the music industry.

The Making of a Child of Destiny Media Kit

In his long-overdue book, Brian K. Moore, tells an unforgettable and heart-wrenching story of one woman’s journey in helping a group of young girls from Houston, Texas achieve fortune and fame, and what actually drove her from heart-break circumstances to push them to stardom.