In a growing trend, Miami developers are beefing up competition and raising the stakes with nationally branded and top tier amenities offered within their buildings. Shortly after Related Companies announced the "equinox® lifestyle" at Brickell Heights, fitness and lifestyle brand elements® has now joined the mix announcing site selection for a flagship location within a tower, adding to DGB now entering the fray at Southeast Financial Center. 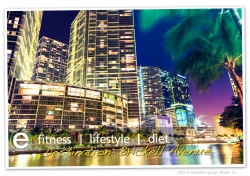 Miami, FL, September 25, 2014 --(PR.com)-- Fitness and lifestyle brand elements® has announced site selection for a flagship location on Miami’s Brickell Avenue. The showcase health club and spa is scheduled to open in Spring 2015. Talks are currently underway with two major developers to include elements® as a resort-level spa and fitness amenity, in a trend with local developers to compete for top amenity placements.

The joint venue project is one of several new elements® branded clubs to South Florida, and the fourth luxury fitness brand to arrive to Brickell Avenue, following Sportclub/LA, Equinox®, and LA Fitness Signature.

“The Brickell area is certainly becoming more lifestyle driven, and residents and corporate employers alike are seeking world-class amenities and services to match the dining and hotel options in the area. elements® is joining other leading world retailers in its decision to open a flagship location in Miami’s new urban core.

The planned elements® club and spa will be a building amenity to residents and guests, as well as (primarily) a public membership club and destination spa. Signature brand features such as BalanceDiet™, thinspa®, candlelight yoga, and fitness valet will be offered in the 12,000 sq ft upscale boutique facility.

The elements® brand has become known for signature fitness and lifestyle amenities combined with an upscale design sense and strong retail component. The brand differs from other health club providers in its “lifestyle” approach to body, beauty, and mind.

The elements® announcement comes on the heels of a multi-club expansion in Florida, with new locations in New England and California recently being announced by the fast-growing women’s fitness brand.

“elements® is uniquely positioned to capitalize on international development opportunities, employing a multi-lingual, diverse cultural brand team in our Miami-based headquarters and a global approach to all of our branding and programs,” commented elements® Brand Director Christopher Palumbo. “The intent has always been to be the worldwide leader in women’s lifestyle and fitness, and this most recent expansion allows us to serve a completely new area of the globe.”