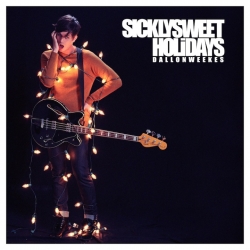 Los Angeles, CA, November 25, 2014 --(PR.com)-- Dallon Weekes who is known as the bass guitarist and contributing songwriter for the band Panic! At The Disco, has just released a Holiday Solo track Independently under his company None You Jerk Records.

This Holiday single titled; "Sickly Sweet Holidays" is of the Pop/Rock genre and written and performed by Dallon Weekes, Ryan Seaman of Falling In Reverse on drums, and other friends contributing on keys, and backing harmonies. "Dallon has provided the perfect melody mixed with an angelic voice that will serenade you through the hectic but lovely holiday season."

Prior to joining Panic! At The Disco nearly 5 years ago, Dallon Weekes was the frontman singer, songwriter and bassist of his band The Brobecks. With all his talent it's good to hear Dallon is still creating and releasing his own solo music independently.