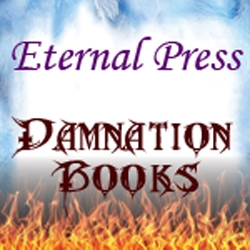 The following is a list of titles, authors and genres that released in December 2014.

Damnation Books, http://damnationBooks.com, and Eternal Press titles, http://eternalPress.biz, are available in the most popular e-formats on their websites and at major e-tail outlets. Including iTunes, B & N, Amazon, OmniLit, Coffee Time Romance and others. The distribution list can be found on the company websites.

Review copies of any titles listed above may be obtained by email to EternalPressPromotions@gmail.com.
Contact
Damnation Books
Sally Franklin Christie
406-209-1403
http://damnationbooks.com