National Bestseller Author, Tiece, Has Done It Again with Scarlett IV. According to the Reviews, This 5 Star, Urban Fiction Bestseller is a Phenomenal Read.

Scarlett IV is an African American Romance novel that is filled with unbelievable twists and unexpected events. 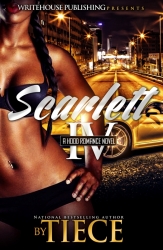 Augusta, GA, December 04, 2014 --(PR.com)-- National Bestseller Author, Tiece, is back with Scarlett IV. The author has woven together a masterpiece that will not only entertain you, but will also hold you until the last written word in the novel. According to the 5 star reviews that are already coming in, Tiece has managed to lure in her audience once again.

Take this intense journey with Scarlett as she finds herself emotionally torn between Troy and Luke. Just as her thoughts become clear on the man she wants to spend her life with, the paternity tests are finally revealed. Will Scarlett get her happily ever after? Or, will the decision she make be one that she’ll forever regret?

Nina nearly succumbs to depression as she struggles with the horrendous thoughts of Rick’s actions before his untimely death. Will Stephen be able to save her before she self destructs?

Sheila is seeking redemption and wants nothing more than to build solid relationships with her loved ones. Unbeknownst to her, things are about to unravel questioning her strength and her loyalty.

Gwen unveils a few startling secrets of her own. Skeletons of this nature are nothing less than jaw dropping and can ultimately destroy everything around her.

Scarlett IV is wickedly entertaining and loaded with unexpected drama throughout.