Participants from around the world will converge in Cambridge, MA. March 25-29, 2015, at the Hyatt Regency Cambridge, 575 Memorial Drive, Cambridge, MA 02139 for the American Adoption Congress’ 36th annual international conference: “Educate, Advocate and Legislate!” With 40 workshops, four keynote speakers, two films and one play; the conference offers an immersive look into this unique community and the complex issues faced by the adoption community. 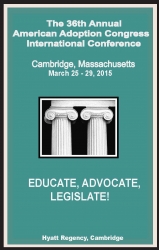 Boston, MA, December 05, 2014 --(PR.com)-- Adoption stories are in the news every day, but they are not always seen within the context of the greater issues that impact the adoption community. “Educate, Advocate and Legislate!” is an exclusive opportunity to explore these issues and current events from the perspective of the people who face them every day and hear their powerful stories of adversity, separation, loss, reunion, grief and resiliency.

Keynote speakers include:
Rev. Dr. Nicholas Cooper, who holdsd a Ph.D. in Psychology and a MSW;
Bennett Greenspan, Founder and President of Family Tree DNA;
David Smolin, Professor of Law and Director of the Center for Children, Law and Ethics, Cumberland Law School, Samford University;
and Rhonda Roorda, co-author of the bood trilogy 'In Their Own Voices: Transracial Adoptees Tell Their Stories'.

Conference workshop topics will cover a variety of issues for those who have created families thru adoption and assisted reproduction, including search and reunion, loss and trauma, historical perspectives, best practices, ethical and clinical practices, the transracial adoptee experience, identity issues, legislative efforts, and birth/first parent issues. Workshops will be relevant to members of the adoption triad and constellation. Support groups will be offered for attendees. Professional Continuing Education Credit (CEU’s) with be available.

This year's films include Tim Kirkman's 'Loggerheads', a movie featuring Bonnie Hunt who brought adoption issues to the screen in 2005. Also Chris Wilson's, 'You Have His Eyes' a story about adoption, search love and family all wrapped up in one documentary. Both of these films have won multiple Film Festival Awards including seven International Film Festival Awards and the Los Angeles Gay and Lesbian Film Festival at the LA Outfest.

Sarah Greer will be performing her solo play Bio-Hazard: A Relative Comedy currently on run Off-Broadway in New York City which has won the United Solo Theater Festival Award for Best Comedy.

Since 1978, the American Adoption Congress has been comprised of individualls, families and organizations committed to adoption reform. We represent those whose lives are touched by adoption or other loss of family continuity.