Beau "Casper" Smart, current creative director of some of the music industry's mega singers such as Ariana Grande, Nicki Minaj, Jessie J and many more, took it to a new level of fitness for his upcoming film staring in "Street" as Remo Street. The 27-year-old actor showed off big arms and a six-pack chest during a fight scene. Blood, sweat, and even the possibility of missing teeth couldn't keep Beau from looking hot as he through punches. 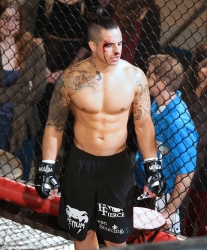 Beverly Hills, CA, January 26, 2015 --(PR.com)-- The film centers around a young man named Remo Street (played by Beau Casper Smart), a former wrestling champion who spends his days job searching and with great ingenuity forces himself to train at night whenever and however he can. It seems his life long dream of becoming a professional fighter just might elude him until one fateful night when destiny takes him an entirely new direction.

While finishing one evening from a days job hunt this young man is forced to fight for his life when a chance encounter with a beautiful woman puts him in the corner of an up and coming champion, a Russian gangster and the seedy underworld of arson, gambling and bare knuckle boxing. His passion for fighting becomes a struggle to train a heartless champ and keep his family safe while he balances between the two worlds.

As a MMA fight film produced by veteran producer Lyle Howry and Emmy award director Bradford May ,it will more than satisfy the hard-line fight fans. Choreographed by Arnold Chon, one of the industry’s most knowledgeable fight coordinators in on-screen MMA fights, every fight seen is action packed, believable, and delivers with a “punch.” That, coupled with Beau Casper Smart’s athleticism and acting performance, along with featuring some of MMA’s best fighters - past and present, such as: Frank Trigg, Emanuel Newton, Matt Mitrione, Uriah Hall, Jay Hieron, and one of WWE’s finest – John Hennigan (aka Johnny Nitro), makes Street destined to be on the top list of every fight enthusiast. Paralleling movies like Rocky and Rudy, Street is also an underdog film about second changes, redemption, faith, belief, and... never quitting. As such, the film is both heart-felt, motivational and inspiring.
Contact
Skinfly Entertainment
Kyle Howry
310-362-1567
streetthemovie.net
skinflyentertainment.com