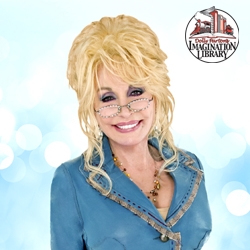 “My commitment to kids has always been to deliver the very best books right to their doorstep and last year we put over 9 million books in the hands of children and their families. Of course, none of this would be possible without the contributions of these talented authors, illustrators and the hundreds of local partners who love kids as much as I do,” said Dolly Parton.

The list of selected titles include new and popular childrens books like: “Each Peach Pear Plum” by Janet and Alan Ahlberg, “Hairy Maclary from Donaldson's Dairy” by Lynley Dodd, and “Charlie and Lola: I am Really, Really Concentrating” by Lauren Child.