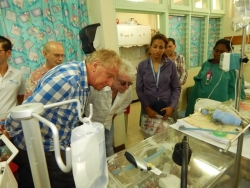 Davie, FL, February 16, 2015 --(PR.com)-- Recently named as Goodwill Ambassadors of the Issa Trust Foundation, an organization focused on pediatric healthcare and education for children and families in Jamaica, Graham Russell and Russell Hitchcock of Air Supply (www.airsupplymusic.com) traveled on February 2 to the parish of St. Mary to witness first-hand the struggles of thousands of the island nation’s children.

The veteran hit-making duo toured Annotto Bay Hospital, St. Ann’s Bay Hospital and Free Hill Primary and Infant School. Diane Pollard, President and CEO of the Issa Trust Foundation, says, “Their award winning song ‘All Out of Love’ has a new meaning for us now. Air Supply performs 130 concerts a year and it’s wonderful that they still have time to show their love for our future, the children.”

Graham Russell said of his experience, “Sharing a day with the children of Jamaica at school and in the Hospitals was one of the most beautiful and touching days I have ever spent. It reminds us that we are all one people and we must share our resources with those far less fortunate and in great need. This is the real world, and we are all a part of it. We all need each other.”

This year, Air Supply celebrates their 40th Anniversary as a musical duo while looking forward to another whirlwind slate of international appearances with one of pop music’s most enduring powerhouse touring bands.

Their most recent release, the CD, DVD and Blu-Ray Live in Hong Kong on Evolution Media, captures one of their classic performances, vibrantly illuminating a true musical phenomenon. Throughout 2015, Air Supply will perform another 100+ dates throughout North America and across the world, hitting Singapore, Malaysia, Indonesia, China, The Philippines, Japan, Taiwan, Jamaica and Chile. Also to come is the release of a new dance single, “I Want You.”

The Issa Trust Foundation a 501(c)(3) nonprofit was established in 2005 by Couples Resorts. The mission of the Foundation is to provide a system of prevention, health promotion and education, community health improvement and other services to promote well-being and development for the people of Jamaica. To learn more about the foundation: www.issatrustfoundation.com.
Contact
Issa Trust Foundation
Diane Pollard, President & CEO
515-480-1683
www.issatrustfoundation.com