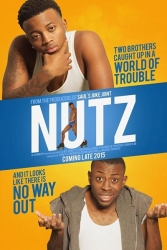 Written and directed by award-winning film producer, Tony Stinyard, the film follows the Nutz brothers as they hit rock bottom after being fired from their jobs, evicted from their apartment and forced to live with their mother.

Students by night, door-to-door salesmen by day, the brothers take to the street on a hilarious journey of entrepreneurship. After celebrating the successful start of their perfume business, they discover that the merchandise is toxic. The two brothers find themselves in a world of trouble as customers begin reporting strange skin irritations, demanding refunds and calling for their heads.

Stinyard, who brought Saul’s Juke Joint (2011, 2014), a high-intensity, theatrical dance musical to the stage, continues to make his mark in theatre and independent films. Known for Sex, Love, & Consequences (2009), he won a World Wide Online Competition in the Your Indie Film Festival for most popular film (2010) and in 2013 the Producers Award in the Atlanta Black Theatre Festival where he was recognized as Festival Favorite.

Stinyard’s belief in providing opportunities for talents to be showcased while cultivating their entertainment aspirations and endeavors is one of the reasons for his successful projects and community support. The production of NUTZ is no different. He has brought together a talented, diverse and entertainingly funny cast that will have audiences going “nutz” in gut-busting laughter.

Be a part of making this independent film a success, consider making a donation to help fund the project at http://www.nutzthemovie.com.

For more information on NUTZ the Movie and AMS Visions & Productions, contact

Press Release for NUTZ the Movie