CANDY HOUSE Inc. launched a Kickstarter campaign for Sesame - the world's first instant smart lock - on Feb. 25, 2015. Sesame has now raised more than $700,000 in crowdfunding and has more than 4,000 backers. 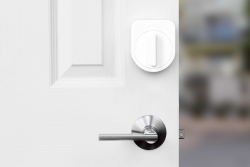 “Sesame is actually more like a robotic hand, than a smart lock,” said Jerming Gu, inventor of Sesame.

With a five-patented design, Sesame works with just about any deadbolt in the world. Users can install it in seconds, without replacing existing locks or removing anything.

CANDY HOUSE also offers an optional access point, which connects Sesame to the Internet when plugged into any nearby outlet. It lets users control Sesame wherever they are.

With Internet connection capability, users can allow guests in remotely. They can also control who has access and when. To ensure safety, the Sesame app also sends out a notification whenever the door opens or closes.

A new feature also lets users open Sesame with a custom knock on the phone or door, without pulling out their phones.