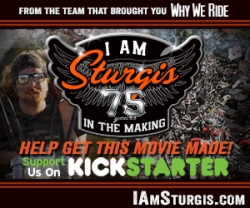 Moorpark, CA, March 31, 2015 --(PR.com)-- Why We Ride Films, the production team that brought you Why We Ride, the most critically acclaimed motorcycle movie of all time, is launching a Kickstarter campaign to help fund its new film www.IAmSturgis.com.

"We've received thousands of letters from fans telling us that after seeing Why We Ride they decided to 'throw their leg over two-wheels' and become motorcyclists," says James Walker, producer of Why We Ride. "We cannot stop with just one movie. This is now a movement, and we would love to have the community help us continue telling these inspiring stories about our motorcycle culture."

The impetus for the new movie stems partly from this year's Sturgis Motorcycle Rally being the 75th Anniversary of that motorcycling institution. In recent years, the Sturgis rally has drawn half a million participants, but attendance estimates for this year's anniversary rally exceed one million riders. There may never be a better time to capture the passion, dedication and camaraderie of the motorcycling community, and there certainly is no better place than the iconic Sturgis gathering.

In South Dakota, state and local support for the new film has been swift and enthusiastic. On the state side, the filmmakers are grateful for the immediate interest and assistance offered by the South Dakota Governor's Office, Department of Tourism, and Film & Media Relations Office. And even more gratifying is the keenness with which Mark Carstenson, Mayor of Sturgis, and Brenda Vasknetz, Sturgis Motorcycle Rally Director, have responded.

When making Why We Ride, Sturgis was the first filming location, and it had an immediate emotional effect on the filmmakers. "There is a spirit there that enters you and grabs your heart," says Bryan H. Carroll, producer/director. "The beauty of the Black Hills is God given. You put your hand on a boulder and you feel this energy; you can feel it in the air. It's easy to understand why American Indians hold this place sacred."

"Sturgis is not just a place--it's who we are," continues Carroll. "When you say, 'I am an American,' it's not about your address or even where you were born. It's in your DNA, your spirit. It's why people from all over the world have been coming to this country for the past 250 years. It was always in them--they just needed a place to gather and be around like-minded people. This is the same story as Sturgis. There are many of us out there who are still venturing, still seeking out that next journey."

To launch the project, Why We Ride Films hopes to raise $350,000 of the production budget for I AM STURGIS through their Kickstarter campaign. There are many contribution levels, starting with "The Wave," a $5 donation that gets you a digital version of the movie poster. A $15 "First Ride" donation earns an early digital download of the film. Increasing donations up to $75 are rewarded with patches, pins, stickers, T-shirts and limited edition Blu-Ray/DVD film combo packs. Large-dollar (ranging from $125 to $10,000) donators receive Sturgis 75th Anniversary Club Rewards, movie premiere passes, and they can even get production credits (up to "associate producer" and "co-executive producer") and private theatrical screenings in their hometowns.

"We made www.whyweride.com about a community," says producer James Walker. "Now, we want to invite the community to help make our next film: I AM STURGIS!"

A campaign trailer for I AM STURGIS is viewable at www.IAmSturgis.com.

Why We Ride Films urges those with a passion for motorcycling to join them in bringing I AM STURGIS to the big screen. This is a collective endeavor, made by and for people with a fervor for riding. Anyone can pledge support and be a part of the movie. Those wanting to participate in crowdfunding this project can do so at www.IAmSturgis.com.

About Why We Ride: Why We Ride is a feature length documentary film. Since its December 2013 release, it has quickly become the most critically acclaimed motorcycle movie of all time. Independently distributed by producer/director Bryan H. Carroll and producer James Walker--recent recipients of American Motorcyclist Magazine's 2014 Motorcyclists of the Year award--Why We Ride's aim is to use the power of cinema not only to entertain but also educate, inspire and celebrate the world of motorcycling with audiences worldwide. To learn more about Why We Ride, visit www.whyweride.com.

I Am Sturgis Banner

I Am Sturgis Banner #2