DirectBuy of Toronto Marks 10 Years of Service; Raises $10,000 for FightSMA

DirectBuy of Toronto North raises $10,00 for FightSMA, a charity dedicated to finding a cure for Spinal Muscular Atrophy (SMA). 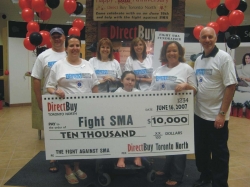 Toronto, Canada, December 05, 2007 --(PR.com)-- For any business, reaching the 10-year anniversary is an exciting benchmark. But the team at DirectBuy of Toronto North gave the milestone even more meaning by turning their anniversary celebration into an opportunity to raise awareness – and $10,000 – for FightSMA.

It all started when the Toronto North team began brainstorming about how to recognize their centre’s tenth anniversary. They all agreed on one thing – the event should not only be fun, but should also help a good cause.

From the beginning, the team had one special charity in mind, Fight SMA. The nine-year-old daughter of Toronto North members Shawn and Tracy Lacey, Tori, has SMA, and the couple runs their own charity for the cause, “Tori’s Buddies.” Since the Laceys joined DirectBuy in March of 2004, the Toronto North team has become friends with the entire family and has become aware of the importance of finding a cure for SMA.

Led by DirectBuy of Toronto North franchisees Steven and Kary Tratner, Service Manager Holly Painter and Member Service Supervisor Eilish Reid, staff members coordinated all the details for the event. Manufacturers and local vendors helped the cause, too, by donating prizes like an LCD television, furniture, jewelry and gift baskets for a raffle and silent auction.

"When Holly called to let us know what the team was doing for FightSMA, we were overjoyed," says Tracy Lacey. "One of the struggles we have with raising money for SMA is that because it is virtually unheard of, it is very difficult to get people engaged in raising money for it. One of our primary goals for this charity is to raise both money and awareness, and DirectBuy of Toronto North offered us both with this benefit."

On the day of the event, an estimated 400 people arrived at DirectBuy of Toronto North to enjoy face painting, a jumping castle, entertainment by an Elvis look-alike and other activities. Showroom staff and family members also set up a charity barbecue, lemonade stand and fruit stand. But the best part of the day was when it came time to present the cheque to FightSMA for an amount that exceeded the Toronto North team’s expectations – $10,000.

"The silent auction was a great success, and we are very proud to have raised $10,000 for FightSMA with the support of our staff, their families and our members," says Toronto North franchisee Kary Tratner. “The event was enjoyed by dozens of members and their kids, and everyone had a great time.”