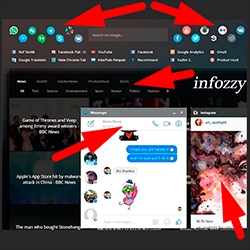 The Infozzy application is a multichannel communicator. Instead of the default Chrome start page with Google search and several preview "cubes," the user gets multiple information and communication channels that work simultaneously.

It would be most useful for those users who have more than one social network account and they need to switch between them during browsing. Infozzy allows users to open several popular messengers and communicate with social friends all from one page. Facebook Messenger, WhatsApp, Skype, Hangouts, WeChat, Telegram, Slack, VK, Facebook feed, Twitter, YouTube, Instagram, Gmail, Reddit, Flickr, VK, 9GAG, HackerNews, ProductHunt, Dribbble - the user may choose the required ones and install them to the start page.

Besides that, Infozzy allows the user to read news from chosen resources and create a personal news channel in a couple of clicks.

Note that Infozzy is the second creation of Kiev programmer acting under nickname "roftentik". Before this he developed Facebook Flat, an extension for Facebook design. This app became very popular: Facebook Flat was installed by more than 100000 users. Also it was featured by international profiled media - Product Hunt, TheNextWeb.com and more.

Infozzy can be downloaded from the Chrome app store for free. It received the highest possible rate from users - 5 of 5.