SBB Media, LLC brings 80 Best Selling Authors, Industry Models and top Photographers to the Palms Hotel and Casino in Las Vegas, Nevada January 15-17th. A charity Auction, fund-raising "wedding," Author Signing, and Wedding Reception will be hosted. A portion of the proceeds will help Carter- a five-year-old Colorado boy that is battling cancer. 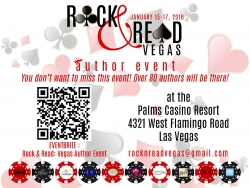 Summer Clark, owner and founder of SBB Media—in one of the most anticipated collaborations of 2016—has announced she will be hosting Rock & Read January 15-17th at the Palms Hotel and Casino in Las Vegas, Nevada.

A special “wedding” has been organized between Ms. Clark and one of the models as voted on by the readers and attendees of the event. All proceeds of the raffle and auctions held for this event are being donated to the cancer treatment of a five-year-old boy named Carter. More information can be found here: https://www.gofundme.com/w5mdd7q. The Wedding, Author Signing and After Party is open to the public—with ticket purchase—and a portion of the proceeds will be donated to Carter’s treatment and finding a cure.

For tickets to the event: http://www.eventbrite.com/e/rock-read-vegas-author-event-tickets-16987822033. Any media outlet interested in covering the story will be offered complimentary tickets to attend the event.

A complete list of Authors, Models, and Industry Professionals that will be in attendance.