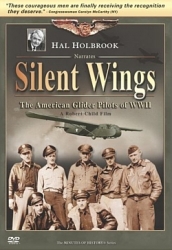 From the early race to build gliders to the D-Day invasion at Normandy and Nazi Germany’s final surrender, Silent Wings - The American Glider Pilots of WWII which also features Walter Cronkite and Andy Rooney, reveals the critical role gliders played in World War II offensives. Through rare archival footage and photographs, the film places the audience right at the center of the action in the dangerous world of the American glider pilot.

The CINE Golden Eagle Awards, distinguishing excellence in professional works, are recognized internationally as the symbols of the highest production standards in filmmaking and videography. Since its founding in 1957, CINE has been dedicated to discovering, rewarding, educating and supporting established and emerging talent in film and video. Among great talent whose first major awards included the CINE Golden Eagle are Steven Spielberg and Ron Howard and such great documentarians as Ken Burns.

Silent Wings is distributed nationwide on DVD by Inecom Entertainment Company and available at leading retail and online outlets throughout the United States.