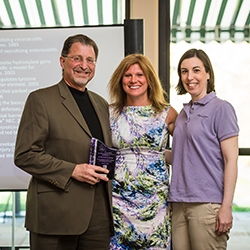 Milford, CT, May 05, 2016 --(PR.com)-- The Morgan Leary Vaughan Fund honored Edmund F. La Gamma, MD, Chief, Newborn Medicine at Maria Fareri Children's Hospital, a Member of the Westchester Medical Center Health Network, with the inaugural Lily Pedro Award for Excellence. The event, The 1st Annual Morgan's FunDay, was held at the Mahopac Golf and Beach Club in Mahopac, NY on April 24, 2016, and raised awareness about, and funds for research in, Necrotizing Enterocolitis (NEC).

Morgan’s FunDay was organized and hosted by Jennifer Degl, Mahopac resident and author of From Hope to Joy: A Memoir of a Mother's Determination and Her Micro Preemie's Struggle to Beat the Odds, and The Morgan Leary Vaughan Fund, whose mission is to promote public awareness about NEC and the potentially devastating effects it can have on preemies and their families, and to advance research to prevent, diagnose, treat, and ultimately, cure NEC.

"As a member of The Morgan Leary Vaughan Fund's Board of Directors and as a parent of a 23 week micro preemie, I felt the need to do what I could to raise awareness about how devastating Necrotizing Enterocolitis can be to premature babies," Ms. Degl said, "and I'm proud to say that local businesses and citizens in both communities of Putnam and Westchester Counties donated their time, services and money to further research innovative treatments and possible preventions of NEC so that future premature babies may be spared from its consequences."

The Lily Pedro Award for Excellence award was established to recognize individuals or organizations who exemplify the mission, vision, and ideals of The Morgan Leary Vaughan Fund. It is named in memory of Lily Marie Pedro, infant daughter of Katherine and Frank Pedro, who lost her battle with NEC in 2012.

A full recap of the event is available on the From Hope to Joy blog at: http://micropreemie.net/blog/morgans-funday-necrotizing-enterocolitis/

About The Morgan Leary Vaughan Fund, Inc.
The Morgan Leary Vaughan Fund (Morgan’s Fund) is an all-volunteer, public charity dedicated to Necrotizing Enterocolitis (NEC). Its mission is to promote public awareness about NEC and the potentially devastating effects it can have on preemies and their families, and to advance research to prevent, diagnose, treat, and ultimately, cure NEC. Named after Morgan, it celebrates his survival, courage and strength.

Morgan and his twin brother were born at 28 weeks, one day gestation - nearly three months early - each weighing less than 2.5 pounds. At four days old, Morgan developed NEC and lost approximately 20% of his small intestine. Morgan not only survived but has also thrived since his bout with NEC. This is his family's way of paying it forward.