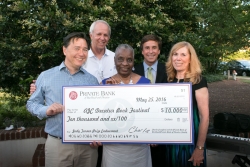 Atlanta, GA, July 06, 2016 --(PR.com)-- In honor of the recent retirement of Judy Turner after a 51-year career in banking and in recognition of her stellar community service resume, Private Bank of Buckhead, which includes Private Bank of Decatur, contributed $10,000 in seed money so the AJC Decatur Book Festival could establish the Judy Turner Prize.

“The Judy Turner prize is going to be presented every year at the Decatur Book Festival, recognizing a book written about community, because I can’t think of anything that Judy Turner stands for more than community,” says Daren Wang, Founding Executive Director of the Festival.

The prize will be determined by the Festival’s programming team. There are no specific criteria other than the focus of the book must be on community and published in the current year. The timing of the first prize as well as the amount to be given will be determined based on contributions.

Turner was a founding board member of the Decatur Book Festival in 2005, and has continued to serve as the president of what is now the largest independent book festival in the country. She also has served many other community and business organizations, at the board level and otherwise.

“In 2011, at a time when she could have been resting on the laurels of a remarkable career in banking, Judy joined us to help structure and open Private Bank of Decatur,” says Charlie Crawford, President, CEO and Chairman of Private Bank of Buckhead. “I am honored and proud that Judy chose to write her last professional chapter with us, and can think of no better way to honor her than highlighting her unparalleled community service.”

“We’ve formed a committee and are going to be working on building this endowment, so many of you will be hearing from us,” Wang said at a recent retirement reception for Turner, noting that several other commitments toward the endowment had been promised that night. In announcing the Prize, Wang was joined by former Decatur Mayors Bill Floyd and Elizabeth Wilson.

Floyd noted, “Judy, this community owes you a debt that it can never repay, quite honestly, because you have been an instrumental part of everything Decatur has become, and will become, and you have a legacy here that will live on, and we are eternally grateful.”

Wilson echoed Floyd’s thanks and noted Turner’s promise to remain involved in her community. “We’re going to continue to have a great time and continue to make Decatur the best place ever,” Wilson said.